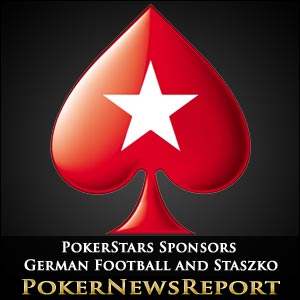 PokerStars has been busy in the sponsorship arena as of late, signing a deal to aquire the naming rights of a football stadium in Lubeck, Germany, and also forging an agreement with Martin Staszko, adding the 2011 World Series of Poker Main Event runner-up to its stable of pros.

The world’s largest [geolink href=”https://www.pokernewsreport.com/online-poker-rooms”]poker website[/geolink] acquired the naming rights to Stadion an der Löhmuhle, a multi-use, 18,000-capacity stadium that is used mostly for football contests and is called home by VfB Lübeck, a fourth-division soccer team. Effective Nov. 23, the stadium is now known as PokerStars.de — Stadion an der Lohmühle. A statement issued by VfB Lübeck reports that the naming rights agreement runs through the completion of the 2012-13 season with an attached option for a three-year extension.

PokerStars has become the second gaming site operator to join with a German club recently, following Betfair’s sponsorship agreement with team Türkiyemspo, which is based in Berlin.

Martin Staszko, the newest Team PokerStars Pro member, joins Martin Hruby in being the second Czech Republic player to align with the poker site. The 35-year-old was virtually unknown before his amazing run in poker’s biggest stage gained him lifetime fame and over $5.4 million in second place prize money. He lost the WSOP Main Event heads-up action to Pius Heinz from Germany, who also signed on with PokerStars as a team pro earlier in November.

Staszko plays under the screen name of “filfedra” on PokerStars and has achieved a tremendous amount of online success while playing there. In May, he won $91,500 in a Spring Championship of Online Poker event and also placed fourth in a World Championship of Online Poker (WCOOP) tourney in September, adding more than $73,000 to his online account.

Several years ago, Staszko was working as a foreman at a manufacturing company in Trinec, his home town. He used to wake at 5 a.m. and often worked twelve-hour shifts, getting only four or five hours of sleep most nights. Those days are long gone after discovering his prowess at poker.

“I enjoy a live game but for practical reasons it is better online,” Staszko said. “I can play every day without ancillary costs. The Czech Republic has almost no decent live tournaments. Even tournaments with buy-ins of five ($275) or ten thousand ($550) crowns for me are not interesting when you have to pay hotel and travel.”