A trial Zoom Poker-only will be conducted by PokerStars next month, namely in an attempt to eliminate table selection and bum-hunting. 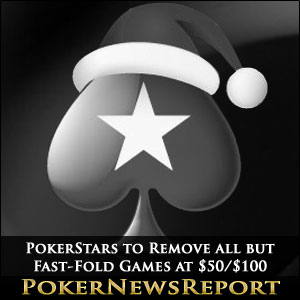 A trial Zoom Poker-only will be conducted by PokerStars next month, namely in an attempt to eliminate table selection and bum-hunting.

Starting on January 1st, PokerStars will be taking its stance against high-stakes angle-shooting to the next level. In a recent announcement, the world’s leading online poker site stated that all NLHE and PLO ring games at the $50/$100 stakes will be closed. In their place – fast fold “Zoom” player pools.

When asked about the reasoning behind the change, a representative of PokerStars claimed that Our biggest motivation for making this change is to reduce the seating and angle-shooting meta-games that surround our current High Stakes offerings.

Ever since the inception of online poker, top professionals have relied on both table selection and preying on weak players to enhance their ROI. Over time, their dependency on what became known as bum-hunting has grown out of control, forcing most sites to take increasingly stricter measures against it. PokerStars feels that by eliminating high-stakes ring-games that players will be able to once again focus on healthy competition.

Currently, PokerStars hosts ring-games up to $200/$400. However, the $50/$100 stake was chosen for the trial because that’s the highest stake that gets off regularly. Zoom Poker is currently offered up to $25/$50. The recently added Zoom Heads Up games will not be subject to the changes.

No decisions regarding the future of high-stakes ring-games on PokerStars will be made until sufficient data and feedback is collected from the trial. However, PokerStars has been toying with the idea of Zoom-only ring-games for a while, and seems committed to finding a way to make it work.

The Case For and Against Zoom-Only Poker

Considering that most players are using automated third-party tools and other tracking software to find the softest available games and the best seats, PokerStars deemed that a radical change was necessary. Compounding matters, PokerStars’ incremental changes to combat bum-hunting have had little effect. But is Zoom-only poker really the answer?

Zoom-only poker has its own set of issues, and is not viewed as an all-inclusive solution by most. For one, most players view poker as a marathon and not a sprint. By forcing them to play a different set of players each hand, from a different a position, most players feel as though they won’t be able to establish a long-term, comfortable rhythm. For this reason and others, many see Zoom-only poker as a mere shadow of real poker.

However, it will solve the problems of table selection and angle-shooting in one giant swoop. And if that is PokerStars’ only objective, then it will likely prove a rousing success.

Overall, response to the trial Zoom-only change has been largely mixed, with some questioning if it will really promote more action and others pointing out its inherent flaws.

One proponent of the change is high-stakes specialist and recognized pro Phil Galfond. In a post on the 2+2 forums, Gallfond states:

I used to love my job and love playing. Today, the main skills you need are seat-getting, table-hopping, and altering your sleep schedule to not miss a fish. Playing a 25/50 session hasn’t been fun for me in over a year.

Thus, while some may argue that Zoom Poker is not real poker, one could also argue that based on Galfond’s statement, high-stakes online poker in its current state, isn’t real poker either.

Will a suitable compromise ever be found, or is high-stakes poker doomed to fall by the wayside? Looks like we’ll find out how PokerStars’ proposed solution fares relatively soon.