PokerStars to Reach Another Major Milestone 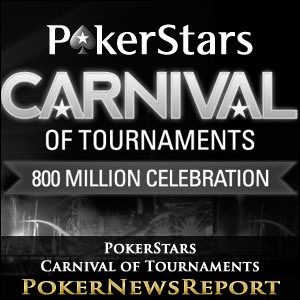 Mere months after awarding over $103k to Microulis69 for winning the 100 billionth hand dealt, the largest online poker site in the world will be running another huge promotional event, this time for its faithful tournament players. In celebration of its 800 millionth tournament, PokerStars will be kicking off a week-long event, culminating in a $1 million guarantee $109 buy-in event.

During the landmark tournament, PokerStars will be handing out an extra $100k in prize money to random tables. Sure to draw thousands upon thousands of faithful grinders, the aptly titled Carnival of Tournaments will cap off what has already become PokerStars most successful post-Black Friday year.

The festivities kick off on October 13, and for the next seven days players will be rewarded with increasing bigger daily guarantees, and a myriad of extra incentive awards. From the 14th through the 18th the site’s “Big” tournaments will have their guarantees increased by 50%. On the 19th that number will be inflated to 100%, and on the final day of the promotion, 200%. All big tournaments will also feature special “bubble ticket prizes,” said to be worth over $100k. In total, more than $2 million in guaranteed prize money will be given away.

Not to be outdone by its own lofty guarantees, PokerStars will be bringing back the ever so popular Golden SNGs. Beginning on the 13th and running the entire week, the Golden SNGs will award sit-and-go aficionados an extra $500,000 in cash rewards. Anyone who plays in a sit-and-go, regardless of stakes, will be eligible for the bonus.

For those who do not know, Golden SNGs work as follows: Select SNGs are selected at random to become Golden SNGs. If selected, a prize pool multiplier of 2x, 3x or more is applied. The lucky participants of a Golden SNG will become eligible for larger payouts, all without having to pay an additional dime. All SNG formats are eligible to become Golden SNGs, including multi-table and heads-up.

It comes as no surprise that PokerStars first Golden SNG promotion, which took place last June, was extremely well-received among the site’s faithful. In fact, it completely shattered all but the highest expectations. In response PokerStars added a $400k more in prize money than it had originally planned.

This time around the biggest Golden SNG will grant players up to 5x their buy-in, not quite as favorable as the last Golden SNG promotion, but noteworthy nonetheless.

The actual 800 millionth tournament is expected to draw at least 10,000 runners, an extraordinary amount for a $109 buy-in tourney, even by PokerStars illustrious standards.