PokerStars have announced that they are to open a live poker venue in Macau´s “City of Dream´s – one of Asia´s leading integrated entertainment resorts. 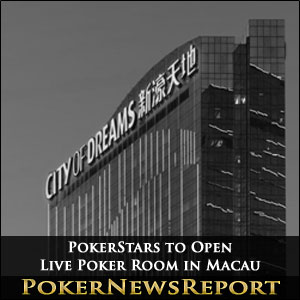 PokerStars have announced that they are to open a live poker venue in Macau´s “City of Dream´s – one of Asia´s leading integrated entertainment resorts.

The poker room will be the largest branded poker venue in Macau and will be located on the main floor of the City of Dreams casino, offering cash games and daily tournaments on thirteen permanent tables. The venue is also intended to be the future permanent home for the PokerStars-sponsored Asia Pacific Poker Tour Macau, Asia Championship of Poker, Macau Poker Cup and the Macau Millions.

Speaking about the plans for “PokerStars Live at the City of Dreams”, Danny McDonagh – PokerStars Director of Live Operations for Asia-Pacific said “The PokerStars online brand drives more traffic to live poker events than any other. Players know that PokerStars is synonymous with integrity and high quality. That makes this collaboration a natural fit because City of Dreams has been at the forefront in providing the most innovative and premium gaming experience that is second to none in Macau.”

PokerStars Live at the City of Dreams is just the latest live venture that PokerStars are indulging in. Just last month the doors were opened for the first time to the PokerStars Madrid Poker Room in the Spanish capital´s Gran Madrid Casino when the venue successfully hosted the first leg of the Estrellas Poker Tour. An equity deal with the Hippodrome Casino in London will see a PokerStars branded poker room opening by Easter and this third PokerStars Live venture in Macau is expected to be up and running by the end of the year.

Next on PokerStars´ shopping list is the Atlantic Club Casino Hotel in Atlantic City. The deal for a fourth PokerStars Live venue hinges on suitable gaming legislation being passed by the end of March and if the Rational Group (PokerStars´ parent company) are granted an interim casino licence by New Jersey´s Casino Control Commission. It would be unlike PokerStars to enter into such an agreement if there was unlikely to be an unsuccessful conclusion to the deal, and particularly as there are easier ways to get a foothold in the US online poker market.

Back in the Virtual World

Meanwhile, on a PokerStars site near you, satellites begin this Sunday for PokerStars´ “Sunday Million” 7th Anniversary $7 million guaranteed tournament. Satellites for the big event start at just $1.00 or 50 FPPs and on Sunday 3rd March – just hours before the cards are in the air for the target tournament – a “super-satellite” with 1,000 seats guaranteed for the $215.00 buy-in event will be hosted on the site.