PokerStars is set to begin the new year by changing its rake structure from the dealt method to the weighted-contributed format in calculating how its players will earn VIP points, which will translate into a noticeable difference in the amount of cashback received by poker players in the top site’s VIP rewards program. 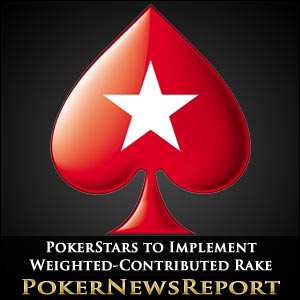 PokerStars is set to begin the new year by changing its rake structure from the dealt method to the weighted-contributed format in calculating how its players will earn VIP points, which will translate into a noticeable difference in the amount of cashback received by poker players in the top site’s VIP rewards program.

Effective Jan. 1, 2012, the new rake attribution scheme will award VIP points to players that chip in money to the pot by either posting a blind or wagering. The dealt method, which is currently used at PokerStars, awards points to any players who are dealt cards, regardless of whether a player actually contributed or wagered in a particular hand. The dealt method allows a player who folds his cards preflop to receive VIP points merely for accepting dealt cards. The weighted-contributed format will require players to contribute money into the pot in order to garner VIP points.

In the switch to the new rake attribution format, the rake collected by PokerStars will remain the same and the amount of VIP points doled out to players will also be unchanged. However, the allocation of VIP points will change in that those players who kick in money to the pot will acquire more VIP points and players who folded their cards without contributing receive zero VIP points. Generally, loose players will be awarded more points and tight, disciplined players will accumulate less. Some industry observers believe that the weighted-contributed structure distributes VIP points more fairly, yet others criticize the promulgation toward more reckless play.

PokerStars’ VIP program allocates 5.5 VIP Player Points (VPPs) for each U.S. dollar paid in rake. A multiplier rate is then used based on each individual player’s VIP status that converts VPPs to Frequent Player Points (FPPs), which can be redeemed for tournament tickets, gifts and cash bonuses. PokerStars’ high volume players that play multiple tables simultaneously find that the rewards received from the loyalty program can be highly worthwhile. A 30% rakeback rate is available to Supernova players, while a Supernova Elite, requiring an incredible amount of rake generation in the ballpark of $180,000 per year, can earn a 60% return on the money paid in rake to PokerStars. The Supernova Elite status was achieved by several hundred players in 2010. Supernova players, at one step below the top-tier of the Supernova Elite, numbered more than 8,000 players last year.

The VIP points earned in sit-n-gos and multi-table tourneys remains unchanged, as the new format is applicable only to cash games. In following the trend of other poker sites by switching to the weighted-contributed model, the number of poker players effected will number in the thousands. High-ranked players who play at a high volume are expected to receive less VIP points, while casual players typically will earn more under the new scheme. Since lower-ranked players will get more VPPs and the Supernova classes will acquire less, the multiplier conversion to FPPs will create fewer redeemable points earned, benefiting PokerStars by requiring less payouts in rakeback rewards.