PokerStars to Hold Fund-Raisers for Thor Hansen this Sunday

The poker world is uniting to show support for two-time WSOP winner Thor Hansen, who has been diagnosed with cancer, with PokerStars organising poker tournaments to raise cash for his fund. 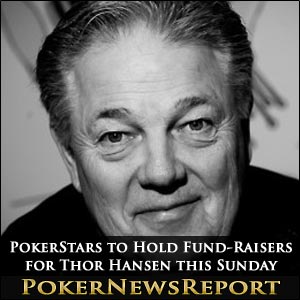 Many of you will already know that two-time World Series of Poker (WSOP) bracelet winner Thor Hansen has been diagnosed with cancer. The 64-year-old Norwegian poker legend only discovered the terrible news a few weeks back, but already the poker world is uniting to show their support with PokerStars organising two tournaments for this coming Sunday to raise cash for the Thor Hansen Fund – which was created by Hansen’s good friends and fellow pros Andreas Høivold and Frode Fagerli – to help with his treatment.

Hansen – a former professional pool player – is considered by many in the Scandinavian nation to be the godfather of Norwegian poker, while he was fittingly the first recipient of the Norwegian Poker Player of the Year award back in 2005.

But the Norwegian has retained his keen sense of humour, saying: “I don’t count on dying tomorrow. I have to fight and we’ll see if I can win another good poker hand.”

The European Poker Tour (EPT) announced the online events on their Twitter account, saying: “THOR HANSEN FUND RAISER TOURNEY ON POKERSTARS ON SUNDAY. There will be a couple of charity tournament on PokerStars…

The first event will begin at 19:30 CET (Central European Time) and is a $10+$10 buy-in competition that will split the money between the prize pool and the Thor Hansen Charity Fund.

The second tournament will start at 20:00 and is a $50+$50 buy-in event that will also share the cash evenly between the prize pool and the charity fund.

If you want to help the likeable Hansen – who won 1988’s $5,000 buy-in Limit Seven-Card Stud event and the $1,500 buy-in No-Limit Deuce to Seven Lowball tournament at the 2002 WSOP – get yourself on over to PokerStars and check under the ‘Tourneys – Regional’ tab to register.

The seventh staging of the event will be hosted by One Step Programs and presented by Robert W Baird in the Illinois city as One Step Programs – which supports kids suffering from cancer by providing camp experiences and educational programmes – offer over $20,000 in prizes that includes an incredible WSOP main event package valued at $10,000.

Meanwhile, PokerStars have joined forces with the Amateur Poker Association and Tour (APAT) to present the sixth series of the association’s National Online League in the UK and Ireland.

PokerStars Teams Up With Amateur Poker Association and Tour

The league – which runs from March 11 to June 17 – will feature players from a dozen regions battling it out for seats on the UK and Ireland Poker Tour (UKIPT), while PokerStars’ Sunday Kickoff and Sunday Million places can also be won.

Every one of the 15 league tournaments will run on Sundays at 20:00 GMT (Greenwich Mean Time) – only at PokerStars – while players can also pick up National Ranking Points for the APAT that will see the leading finishers have the opportunity to represent Scotland, Wales, Ireland and England at the fifth World Championship of Amateur Poker (WCOAP) at Nottingham’s Dusk Till Dawn venue later in the year.

The APAT altered the structure of the league to encompass the 12 regional teams so that there is a better distribution of competitors in the event. The teams are South West, South East, London & Home Counties, East of England, East Midlands, West Midlands, Wales, Yorkshire, North West, North East, Scotland and Ireland.

The league events will include an $11 buy-in, with the competition structure supplying 5,000 in starting chips and 15-minute blind levels.

Finally, PokerStars have announced that they have increased the guaranteed prize pools for numerous tournaments – including the poker room’s special Saturday events, the $11 buy-in Sunday Storm, the Sunday Supersonic and Sunday 500.

Saturday’s special events will also see significant cash boosts, with – for example – the Saturday Splash enjoying a 100% increase to $100,000.