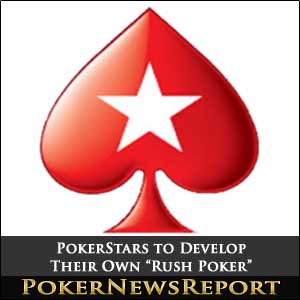 According to a Tweet by PokerStars professional poker player Dale “Daleroxxu” Philip, PokerStars are in the process of developing a “fast moving ring game product” which is due to go into public beta testing in the near future.

It is difficult to ignore the fact that there has been a gap left in the market for a “Rush Poker” type of game which was such a popular feature of Full Tilt Poker´s portfolio before their demise.

No further information is available about the design or content of the new game just yet, but speculation exists that it will be more than just a hyper-turbo ring game. The original “Rush Poker” was developed by Robert S. Burnside and Jerry W. Biesel for Hold´em One Inc. in 2007, and was exclusively licensed to Full Tilt Poker.

Now that the Full Tilt Poker licensed has a) expired and b) not been paid for, there is a real possibility that a very similar game could appear on PokerStars. A high-speed “ring game product” already exists at Terminal Poker for Windows, Mac and Flash and, with the marketing power available to PokerStars, there is little doubt that they would corner the market with a Rush Poker alternative and fill the void left by Full Tilt Poker.

At the time Full Tilt Poker launched Rush Poker, the PokerStars hierarchy stated that they had considered the possibility on launching an identical product at the same time but felt that it was not in their best interests. With upcoming DoJ hearings and the possibility of substantial fines, maybe PokerStars have had a change of heart – or a rush of blood to the head!