The PokerStars ‘Turbo Championship of Online Poker’ gets into gear today with fifty turbo tournaments scheduled to take place over the next eleven days. 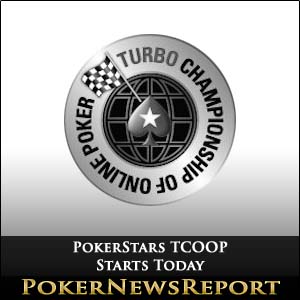 The PokerStars ‘Turbo Championship of Online Poker’ gets into gear today with fifty turbo tournaments scheduled to take place over the next eleven days.

Online poker players who enjoy tournament series are spoilt for choice at the moment. With the Mini-FTOPS XXI running until the weekend and the Online Super Series II in full swing, PokerStars start their second ‘Turbo Championship of Online Poker’ (TCOOP) this evening with four events that have a combined guarantee of $1.95 million!

The fifty-tournament series is headlined by the $700.00 buy-in TCOOP Main Event which carries a guarantee of $2 million, but buy-ins to the supporting events start from $7.50 for those who have more modest bankrolls. There is also a wide range of poker disciplines included in the TCOOP schedule, which includes Omaha, Stud, Razz, HORSE and a $100,000 guaranteed 8-Game tournament which takes place on the final Sunday of the series.

The total guaranteed prize money over the fifty events is $15 million – up $5 million from 2012 – but widely anticipated to be exceeded following the success of last year´s series when more than $18 million was paid out to the players who cashed in the events.

Among last year´s big winners were Norwegian handball player Christian icallany Spanne who took down the $2,100 buy-in Hi-Rollers for $210,259, Toby 810ofclubs Lewis who collected $68,676 in the Turbo Knockout tournament and David Betudontbet Emmons, who beat a field of 3,667 players to win the inaugural TCOOP Main Event in less than five hours and pick up the $382,855 first prize.

Alongside the comprehensive series of online turbo tournaments, PokerStars will be running a tournament leaderboard competition with prizes being awarded to the top 50 players. Players who cash in any of the TCOOP events will be awarded points depending on the nature of the tournament and their finishing position.

The winner of the TCOOP Leaderboard competition will win a $16,500 Main Event package to the PokerStars Caribbean Adventure in 2014; with those who fall narrowly short of the top spot being rewarded for their efforts with tickets to the major 2013 Spring Championship of Online Poker – the dates for which are still to be announced.