A guaranteed prize pool of $7 million will be up for grabs at the seventh anniversary celebration of the PokerStars Sunday Million on March 3, 2013. 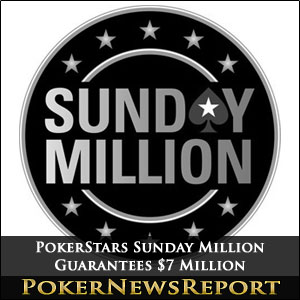 A guaranteed prize pool of $7 million will be up for grabs at the seventh anniversary celebration of the PokerStars Sunday Million on March 3, 2013.

The champion of the event will take home nothing less than $1 million. The buy-in is set at $215, but there are a number of satellites available to the anniversary tournament that start at only $1. Those $1 satellites will run hourly beginning on Feb. 24.

A special satellite with a buy-in of $11 that guarantees 1,000 seats to the anniversary of poker’s richest weekly tournament will be held on the day of the event. Those players who’d like to take a shot at winning a million bucks without wagering any cash at all can participate in special VIP Bash satellites by using Frequent Player Points (FPPs). You can enter for as low as 50 FPPs. Players who reach the final table of the 7th Anniversary Sunday Million will appear on the PokerStars Blog and PokerStars.TV.

The birthday celebration tournament will begin at 14:30 ET on March 3. One year ago for the Sixth Anniversary Sunday Million that guaranteed $6 million, a total of 33,732 players entered creating a prize pool of $6,746,400. On PokerStars 10th Anniversary celebration in December of 2011, the largest field in Sunday Million history attracted 62,116 players that resulted in a record prize pool of $12,423,200. “First-Eagle” took home the championship and $1,146,574.

PokerStars is the world’s largest online poker site and currently has a seven-day average of 23,600 players. That’s almost six times more players than the second-ranked site, which happens to be sister site Full Tilt Poker.

PokerStars has a superb VIP reward program and the widest selection of tables on which to play. The deposit bonus is one of the most unique in the business, set at 100% up to $600 and allowing three deposits within a span of 90 days, instead of just one deposit. To top it off, PokerStars allows an entire six months to claim the bonus by earning FPPs. Every 170 FPPs collected will receive an incremental payment of $10 directly into your account.

If you haven’t yet played at PokerStars, now is the time to make your first deposit to take advantage of the generous deposit bonus and to participate in the Sunday Million 7th Anniversary where $1 can turn into $1 million! Signing up is easy. Just click the link below and you’ll be on your way to playing the world’s most exciting online poker action!