The parent company of PokerStars filed a lawsuit against the Atlantic Club’s owners to block a termination notice and keep the acquisition agreement intact. 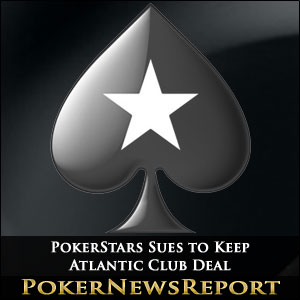 The parent company of PokerStars filed a lawsuit against the Atlantic Club’s owners to block a termination notice and keep the acquisition agreement intact.

Judge Raymond A. Batten granted the request of the Rational Group for a temporary restraining order (TRO), which prevents the Atlantic Club owners from possibly entering into any other agreements to sell the struggling casino to another party. The judge’s ruling is a major victory for PokerStars, at least temporarily, in its desire to acquire a land-based New Jersey casino and enter the newly-regulated U.S. online poker market.

Last December, Rational Group signed a purchase agreement with Resorts International (led by Colony Capital) to acquire the casino for a reported $15 million. The deal was contingent upon PokerStars obtaining a casino operating license from New Jersey gaming officials. The licensing process ran into delays when PokerStars’ initial application for interim casino authorization was found to be incomplete in January.

It wasn’t until April 10 that the New Jersey Division of Gaming Enforcement ruled the PokerStars application complete, which set in motion a 120-day period allowing regulators to investigate and rule on the license request. This apparently conflicted with a provision in the acquisition agreement that permitted Resorts International to terminate the agreement if licensing had not been secured by PokerStars as of April 26.

According to the lawsuit, Resorts International proposed a short 10-day extension to the deadline on April 26 in exchange for a payment of $6 million. But the next day, the company sent PokerStars a notice of termination in an attempt to wiggle out of the deal and also requested a $4 million termination fee.

PokerStars cried foul, claiming that the casino owners were acting in bad faith and breaching the existing contract. The attorneys for PokerStars cited a New Jersey regulation that forbids a casino purchase from being cancelled after the license application process has begun. The lawyers also assert that PokerStars has already paid $11 million since October to keep the casino operating. Coupled with the $4 million termination fee, PokerStars would have shelled out $15 million in the last six months or so. That total would equal the complete $15 million purchase price of the casino and leave the world’s top poker site with nothing in return.

Judge Batten has sided with PokerStars by granting the TRO. The judge found that the April 26 expiration date contained in the acquisition agreement cannot be enforced because the license approval process is underway and not yet complete. But that ruling is only temporary until Resorts International has an opportunity to respond to the lawsuit. A further hearing on the matter has been scheduled for May 17 at 1:30 p.m.