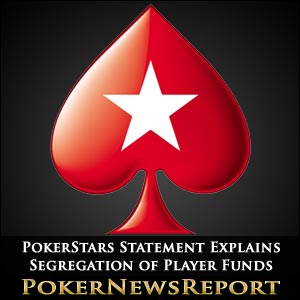 On the brink of its 10th anniversary of offering online poker throughout the world, except to the U.S. market since mid-April due to the Black Friday indictments of the three [geolink href=”https://www.pokernewsreport.com/online-poker-rooms”]top online poker sites[/geolink], the PokerStars blog took the time to reiterate the company’s dedication of exemplary customer service to its loyal players.

Since opening its virtual doors on Dec.18, 2001, [geolink href=”https://www.pokernewsreport.com/pokerstars”]PokerStars[/geolink] has maintained player funds in separate accounts from operational funds. Being licensed to operate a poker room by the Isle of Man Gambling Supervision Commission (GSC), PokerStars proudly adheres to the licensing body’s strict requirements for internet gaming, namely, that any player-owned funds (deposits and winnings) are ring-fenced from the operating funds of the company and held securely in segregated bank accounts.

The statement, which was authored by PokerStars Head of Corporate Communications Eric Hollreiser, mentions the [geolink href=”http://www.pokershutdowns.com/” target=”_blank”]poker shutdown[/geolink] of operations of [geolink href=”https://www.pokernewsreport.com/full-tilt-poker”]Full Tilt Poker[/geolink], which left players’ funds of the formerly 2nd-ranked in customer traffic online poker site in doubt, where they currently remain today pending the sale of Full Tilt to Group Bernard Tapie (GBT) for $80 million following the approval of Full Tilt shareholders to forfeit company assets to the Department of Justice (DoJ).

PokerStars’ statement explained that the money trail in receiving funds from payment processors can take anywhere from a few days to several weeks. In spite of the sometimes extended delay, PokerStars moves funds from its company operating accounts to the segregated accounts of its players on a daily basis. Though payment processors are sometimes tardy and/or fail to process required funds into PokerStars’ accounts for various reasons, the risk involved is shouldered by PokerStars and not its loyal players. PokerStars facilitates this process while under the watchful eye of the Isle of Man GSC.

Each day, accountants at PokerStars review player account deposits and withdrawals to ensure the availability of funds in the players’ segregated accounts. Because of this procedure designed to protect the players, “any risk associated with a disruption to the player fund system–caused by a delinquent payment processor, or a bankrupt bank, or a government action–is borne by PokerStars, because funds to cover such disruptions would come out of our operating income–not player funds,” said Hollreiser.

The Isle of Man GSC reviews PokerStars’ player account balances four times a year and has the regulatory authority to audit the internet poker site at any time, as was done following the DoJ action on April 15 and several times since then. One such audit or review was conducted on June 29, 2011, with the GSC coming to the conclusion that, PokerStars continues to demonstrate compliance with its licence conditions in the Isle of Man. PokerStars continues to offer withdrawals to any players who wish to withdraw their funds, including players in the USA to whom PokerStars does not currently offer real-money gaming. Further information regarding PokerStars’ status with the Isle of Man GSC can be found at: http://www.gov.im/gambling.

PokerStars has refunded more than $125 million to its U.S. online poker players since the DoJ seized a portion of its funds on April 15 and maintains pride in its worldwide reputation for placing its players first and is dedicated to continue providing excellent customer service, the statement said.

The statement on PokerStars’ corporate blog comes at a most turbulent time in the online poker industry. Player accounts are still frozen on Full Tilt and Absolute Poker. Many U.S. players are electing not to play at other [geolink href=”https://www.pokernewsreport.com/us-poker-sites”]poker sites that allow U.S. players[/geolink] for fear of getting their money tied up at another site in an unregulated industry. With lawmakers holding hearings and debates on proposed legalization of online poker and gaming, the future is still uncertain. Yet PokerStars has been thriving for nearly ten years and has been the no. 1 online poker site for the last five.

It is quite refreshing to see a poker site such as PokerStars that is apparently conducting their business properly and is serious in their mission of providing quality service to their players. One player who identified himself as S.G. and claims to have achieved supernova status at PokerStars, posted this comment in response to Hollreiser’s blog/statement, I dont remember seeing anything like this post from any other poker company. By publishing this you confirm your role as the industry leader in customer support and satisfaction and I am proud to be among those customers. S.G. goes on to further say that although his comment may be viewed by some to be posted by a shill of PokerStars, he is concerned only that, In times of ever more worrying poker related scandals, your post is very reassuring and provides further confidence in having chosen the right site for the daily grind.