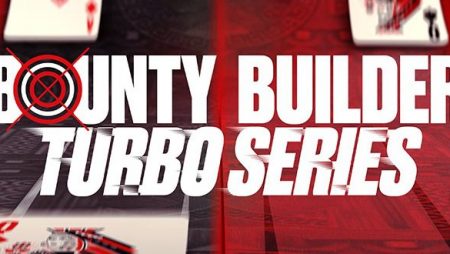 Tournament poker players will be excited to hear the Bounty Builder Turbo Series at PokerStars has now begun. Through June 6, players have access to 184 total events with two weeks of action-filled gaming. There is $25 million in prize money up for grabs, with the potential for more based on the playing field. All of the events will take place in progressive knockout format and each event will be a turbo, with some featuring hyper-turbo status.

The full schedule of the series is filled with plenty of options for everyone. The very first event was an NLHE 8-max Sunday Kick-off featuring a $109 buy-in and a $100,000 prize pool. Several more events took place on Sunday throughout the day to provide something for everyone.

If you want the same potential prize money but a lower buy-in, opt for Event #17. This tournament is an NLHE 8-Max with a low $55 buy-in. It is expected that this event will see a large player turnout. Even smaller events are on the schedule for Monday including Event #18, with a $22 buy-in and $30,000 in total prize money. The options vary, making it easy for you to be able to take part in gaming that suits you best.

With the Bounty Builder Turbo Series, players will find low-end buy-ins at $5.50 and higher options set at $5,200. There is a minimum of 12 events per day, so players will have plenty of action to take part in each day. Easily log in every day and find tournament options that meet your budget needs as well as the time frame for playing.

One of the most popular events on the schedule will be the Main Event. There is not one, but two Main Events scheduled. On May 30, the online poker room will feature the Low Main Event, with a buy-in of $55. This tournament has $1 million in total prize money up for grabs.

For the high Main Event, the tournament has a much larger $530 buy-in. The event offers a higher prize pool as well, coming in at $2 million. Players can choose to compete in one or both online main events during the series.

As with any series, there are ways that players can earn seats to events. PokerStars is hosting satellite events, which offer tickets to certain tournaments in the series. To find satellite options, simply login to your PokerStars account and go to the main tournament lobbies. Satellites are announced on a regular basis and will run up until registration closes for an event.

Get started today by reviewing your satellite options as well as taking a look at the various events on the Bounty Builder Turbo schedule!