PokerStars Speeds Up the Clock

Players who regularly play on PokerStars might have noticed a few decisions being made faster, a few cards being dealt quicker and all-in showdowns being resolved in less time. Fear not! There is nothing wrong with your computer – PokerStars have tweaked their system to make it a little more enjoyable and potentially far more lucrative. 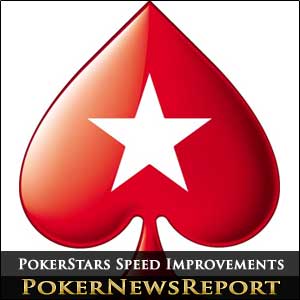 PokerStars Players might have noticed a few decisions being made faster, a few cards being dealt quicker and all-in showdowns being resolved in less time. Fear not! There is nothing wrong with your computer – PokerStars have tweaked their system to make it a little more enjoyable and potentially far more lucrative.

The two major changes to the PokerStars software is that four seconds has been shaved from the time players have in which to make decisions in Hyper-Turbo tournaments before the clock starts ticking away (2 seconds shaved from regular multitable and Sit ´n´ Go tournaments) and community cards are being dealt twice as fast when players are all-in.

Ring games are being speeded up too, but a little more subtly for the present. The turnover time between hands is being shaved by a second and the board cards will be dealt quicker (as above) when players are all-in. The only other change PokerStars players will notice at this stage is that the delay prior to dealing the first hand of a session at a table has been reduced from 15 seconds to 10 seconds.

What it Means to You as a Player

What it means to players playing poker on PokerStars is that there will not be such a long time lapse between hands and you will find yourself playing more hands per hour – consequently Sit ´n´ Go tournaments and MTTs will be resolved a little bit quicker. Gone is the “anticipation” to see if you are going to be sucked out by a fish on the river when all-in, and early reports from players using the new software seem to indicate that there is less risk of going on tilt because of it.

What it Means to Your Pocket

In addition to the reduced risk of going on tilt, more hands an hour means more income (provided you win), more Frequent Player Points and more bonuses. The changes will be more apparent to players who multitable cash games or who play sets of tournaments, and the only losers will be those who would have lost anyway – only without going through so much pain to do so!

When Are the Changes Being Made?

The changes affected by [geolink href=”https://www.pokernewsreport.com/pokerstars”]PokerStars[/geolink] are only being introduced gradually, with the turbo and hyper-turbo games being the first to be tweaked. Once the initial feedback has been analysed, a decision will be made with regard to the extent of the changes – whether the clock will be speeded up in more valuable tournaments and cash games, or should the time taken to deal the cards reduced even further. Time, as they say, will tell!