PokerStars Chairman of the Board Mark Scheinberg has agreed to pay the U.S Government $50 million dollars, bringing resolution to Black Friday case. 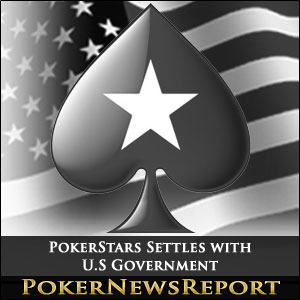 PokerStars Chairman of the Board Mark Scheinberg has agreed to pay the U.S Government $50 million dollars, bringing resolution to Black Friday case.

In a statement released on June 12, 2013, PokerStars Chairman Mark Scheinberg has reportedly reached an agreement with the Southern District of New York, and will forfeit $50 million dollars to resolve claims related to the events of Black Friday. Thus, after over two years, it appears that PokerStars and the U.S Government will have finally resolved their financial disputes.

Once the forfeiture is complete, the U.S is obligated to release any property seized from PokerStars in relation to the Department of Justice’s complaint against the company and its associated partners. However, the $50 million dollars will not be applied towards debts owed as part of last year’s settlement.

In that settlement, which took place in late-July of last year, PokerStars agreed to acquire the assets of the grossly mismanaged Full Tilt Poker. PokerStars was charged with paying $547 million dollars to the DOJ over a three year time frame, most of which would be used to pay back US players who were unable to secure their funds. The remaining $184 million was reserved for non-US online poker players.

A clause in the settlement freed PokerStars from admitting to any wrongdoing. Thus, Pokerstars would also be allowed to reopen operations in the United States, in so long as the U.S government imposed regulations. Unfortunately, the latest piece of legislation, proposed by Republican Peter King is likely to be rejected, meaning that PokerStars will have to wait until at least 2014 to open its doors to all U.S players.

However, there is a silver lining as the $50 million settlement could go a long ways towards bringing PokerStars back to New Jersey. Although the Atlantic Club backed away from PokerStars proposed deal, there are still several casinos that can be bought out relatively inexpensively. And given the goodwill the settlement should buy in New Jersey, it might not be too long before PokerStars reestablishes its presence in the Garden State.

As part of last year’s resolution, PokerStars agreed to not hire anyone in involved with Full Tilt Poker’s misdealings, including professional poker players Howard Lederer and Chris Ferguson. Additionally, former CEO Isai Scheinberg was required to step down. Mark Scheinberg is Isai’s son.