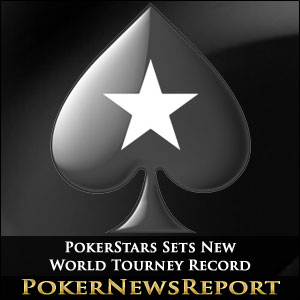 “SlavaPro” from Russia outplayed 224,999 competitors and captured a first place prize of $25,000. That’s a return on investment (ROI) of monolithic proportions after buying in for only $1. And a certain number of players believed to be in the 20% range didn’t even pony up that $1 amount, as PokerStars ran freerolls prior to the record-setting event that gave away some of the seats for free.

The world tournament record coincided with PokerStars’ “Road to 100 Billion” promotion that saw a player from Greece earn more than $103,000 last Thursday when he won the site’s 100 billionth hand dealt. “Microulis69” was the lucky winner when his J-5 in the hole managed to pair up with a Jack on the flop and the hand held up. A total of $1 million was distributed by PokerStars to players at $0.02/0.05 No-Limit Hold’em tables throughout the site on that single hand alone.

The Road to 100 Billion promo that is giving away a whopping total of $5 million is still underway and a new phase begins today for SitNGo players. Another $1 million will be doled out in the “Golden SitNGo” bonanza this week. Random tables will be selected for a prize money boost that can range from 2x to 10x courtesy of PokerStars. Players will know once tables are fully-seated whether their SitNGo tourney has been chosen to reap the giveaway. All SitNGo tables are eligible.

The Guinness World Record for tournament play of 225,000 players is quite impressive considering that players from the U.S. have not been permitted to log on at PokerStars since Black Friday in April of 2011.