PokerStars Scales Down on Pros Roster

It seemed to be only a matter of time before PokerStars would potentially cut down their all-star roster of online poker pro’s on their site. 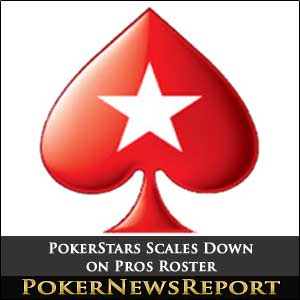 It seemed to be only a matter of time before PokerStars would potentially cut down their all-star roster of online poker pro’s on their site.

That time is apparently now, as PokerStars has decided to eliminate a few PokerStars Pros recently. Since Black Friday occurred, there has been a decline in terms of online poker in general, and of course the appeal of some of the US players is now gone also; as the site is based in only countries outside of the US. While Team PokerStars had quite a few big named players from the United States, they have not gotten rid of all of them.

If you head onto PokerStars, still the largest [geolink href=”https://www.pokernewsreport.com/online-poker-rooms”]online poker site[/geolink] out there today, you’ll find that a few US players like Dennis Phillips, Tom McEvoy, and Bill Chen’s names’ have all been taken down from the “members of Team PokerStars”. No official announcement has been made yet on these players though, but it doesn’t come as a shocker that they decided to slim down the roster a bit after Black Friday. Since the site is no longer allowed to have US players, one could assume that they aren’t bringing in the same amount of money as in the past, so they most likely won’t pay as much to keep pro’s on the roster.

When you look on the site though, you’ll find that there are still quite a few US players under the Team PokerStars list, with names like Vanessa Rousso, Jason Mercier, Joe Cada, David Williams, Vanessa Selbst, Barry Greenstein, and Chris Moneymaker still being listed. All of those names do draw quite a bit of attention from the online poker world regardless of which country the players are from, which makes sense for them remaining on the list.

While McEvoy, Phillips, and Chen all have some great scores on their poker resumes, it seems they are no longer be listed. McEvoy won the World Series of Poker Main Event back in 1983, and has won four total World Series of Poker gold bracelets in his career. Chen won two WSOP bracelets back in 2006, and is plays the game a bit differently than most players do these days; as he plays the game by the numbers, instead of by how he feels about a specific hand. Phillips became a fan favorite during the 2008 World Series of Poker Main Event, as he finished in third place, and came back in 2009 to post a 45th place finish in the Main Event. He then finished in third at the 2010 NBC National Heads-Up Championship to further cement his name as a PokerStars Team Pro.