PokerStars has announced the site is to re-run its $10 million guaranteed Sunday Million Twelfth Anniversary Edition and has also launched a new variant of NL Texas Hold´em called Split Hold´em – which bears more than a passing resemblance to the existing Run It Twice feature on cash game tables. 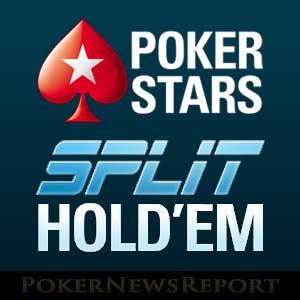 PokerStars has announced the site is to re-run its $10 million guaranteed Sunday Million Twelfth Anniversary Edition and has also launched a new variant of NL Texas Hold´em called Split Hold´em – which bears more than a passing resemblance to the existing Run It Twice feature on cash game tables.

Back in February, PokerStars hosted a special Twelfth Anniversary Edition of its flagship Sunday Million tournament. The event attracted a lot of attention, but not quite enough to meet the tournament´s ambitious $10 million guaranteed prize pool – falling about $1.2 million short.

Possibly due to Party Poker announcing [geolink href=”https://www.pokernewsreport.com/party-poker-releases-new-power-series-tournament-schedule-22223″]big guarantee[/geolink] after [geolink href=”https://www.pokernewsreport.com/party-poker-raises-the-bar-with-20-million-gtd-millions-22063″]big guarantee[/geolink], PokerStars has decided to run the event again on Sunday 22nd April. Again the tournament will have a $10 million guarantee, and again the event will be supported by a comprehensive satellites schedule. Whether or not the event succeeds in surpassing its ambitious guarantee this time, only time will tell.

What the Heck is Split Hold´em?

When you play cash games at PokerStars, you have the option to “Run it Twice” when you or another player is All-In (the option is activated via the Settings > Gameplay tabs in the poker client). When you “Run it Twice”, the remaining community cards are dealt twice over two separate boards. The logic behind running it twice is that the option reduces variance.

The action continues until showdown or until all but one player folds their cards. At showdown, the remaining players reveal their cards and the pot is divided between the winner of each hand – unless one player has won both hands, in which case he or she scoops the entire pot. It takes a fair amount of concentration to master, but the game is already proving to be popular.

Despite attracting plenty of players (possibly due to its novelty value), the new variant of Texas Hold´em has divided the poker community. Whereas some contributors to the 2+2 poker forum insist it is great way to reduce variance and quickly collect points towards the Stars Rewards program, others argue the game is nothing more than a rake grab, as more players will be involved in more hands.

From our experience of observing the games, the action tends to happen a lot quicker than on regular NL Hold´em tables – justifying one 2+2 contributor´s comment that Split Hold´em is “more fun”. Indeed, because of its 6-Max format, it reminds us of Zoom Poker without the opportunity to go to a new table when you fold your cards.

The argument more players will be involved in more hands certainly appears to be true. Again from our experience, there appears to be an awful lot of gambling going on at the tables and not a lot of skill being shown. However, PokerStars is not making them play Split Hold´em games. The site is hosting the game, giving players the opportunity to try it, and deducting rake from the pot as they normally would.

Certainly the dual-pot format of the games will help any new player clear the [geolink href=”https://www.pokernewsreport.com/pokerstars”]PokerStars bonus[/geolink] with less risk to their bankrolls – which is an ideal way to start an online poker experience; but whether or not Split Hold´em remains a permanent fixture in PokerStars´ portfolio of games will likely depend on the volume of traffic once the novelty period ends.