PokerStars has announced the process to migrate UK-based players to an exclusive poker platform on 1st October to comply with new gambling legislation. 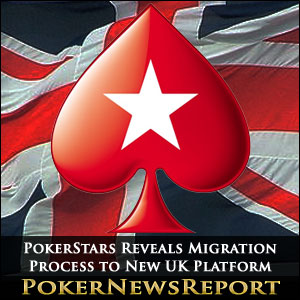 PokerStars has announced the process to migrate UK-based players to an exclusive poker platform on 1st October to comply with new gambling legislation.

In less than two weeks, new regulations come into force that affect remote gambling operators transacting with players based in the UK. Every online poker site supplying a service to players who have registered an account with a UK address must be licensed by the UK Gambling Commission and – from 1st January 2015 – pay a 15% levy on their gross gaming profits.

Despite all the fluff that has been published about offering players better consumer protection, the purpose of the new regulations is to create a level playing field between UK-based operators who already pay a tax on transactions with UK gamblers (i.e. Bet365) and the operators that fled to offshore locations (such as Gibraltar) to take advantage of beneficial tax laws.

Why PokerStars Has to Make Changes

Every company that is supplying a service to players in the UK has to obtain a license from the UK Gambling Commission irrespective of whether they are physically located in the UK or not. Therefore the fact that PokerStars is located on the Isle of Man – a “Crown Dependency” rather than part of the UK – is irrelevant; they would have had to change anyway.

PokerStars got their license from the UK Gambling Commission some time ago; but, in order to track the profits that the company makes from UK players, the world largest online poker site has created a new platform exclusively for players who have registered accounts with a UK address. PokerStars will start migrating players to the new platform on October 1st, and have just released details of the process.

The first time that UK PokerStars players log into their accounts after 00:01 (BST) on Wednesday 1st October, they will prompted to upgrade the PokerStars software (there is no option to avoid this). The upgrade to PokerStars UK should take less than a minute, after which players will be able to continue playing on PokerStars as normal.

UK poker players playing on PokerStars from mobile devices will also be prompted to move their accounts and, once the upgrade is finished, download a new app from the App Store (for iOS users) or from the PokerStars mobile site (for Android users). All usernames and passwords remain the same, and players´ cash and FPP/VIP Points balances will be carried forward to the new platform.

How Will The Migration Affect PokerStars Players?

Once the migration to the PokerStars UK platform is completed, UK players will notice barely any difference at all. The new UK gambling regulations do not require the segregation of player pools such as happened in Spain and Italy, so UK players will still be competing in the same poker games against the same poker players from Europe and the Rest of the World

Come January 2015 – when PokerStars have to start paying the “Point of Consumption” tax – VIP Club Rewards are likely to be reduced in value and new players on PokerStars UK are unlikely to be eligible for the same [geolink href=”https://www.pokernewsreport.com/pokerstars”]PokerStars bonuses[/geolink] that are currently available. PokerStars is yet to announce whether or not it will be increasing its rake percentages or tournament entry fees.

To mark the launch of PokerStars UK (and probably encourage players to migrate sooner rather than later), the site is hosting five £1,000 freeroll tournaments each evening from Wednesday 1st October to Sunday 5th October at 20:00 BST. In order to enter the freeroll tournaments, players must have migrated to the new UK platform where they will find the tournaments under “Tourney” > “Regional”.

Further information about the migration process to PokerStars UK and a comprehensive Q&A section can be found on the PokerStars website.