PokerStars Returns More Than $100 Million To US Players

PokerStars announced that they have returned more than $100 million to US poker players from its past US-facing operations and continues to service requests following the Company’s agreement with the U.S. Department of Justice on April 20th that allowed US customers to cash out their balances. 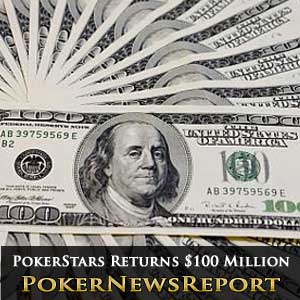 PokerStars announced that they have returned more than $100 million to US poker players from its past US-facing operations and continues to service requests following the Company’s agreement with the U.S. Department of Justice (DoJ) on April 20th that allowed US customers to cash out their balances.

While this is very good news for the people involved, with millions of US poker players shut out of poker sites such as PokerStars, Full Tilt Poker and Absolute Poker, the field of savvy and competent poker players has thinned considerably. The FBI’s raid of three major online poker sites on Black Friday, April 15, 2011, has had various ramifications.

First is that fact that hundreds of millions in American cash is still stuck in online accounts. At first funds were frozen at the sites by the US government; then some sites were allowed to begin returning money in accounts to American players. But that process has been very slow. Right now somewhere around $400 million in US funds is in player accounts waiting to be withdrawn.

Another effect of the government shutdown is that players from other countries are now starting to dominate the tables. The country that has gotten the best bounce from the banning of US players at various online poker sites is Canada. Canadian players are starting to rake in the bucks at a rapid pace. It makes sense. One of the best poker players in the world, Daniel Negreanu, is living in Canada.

Although over the years there have been attempts in America to introduce and pass a law that would basically negate the US law that has caused US players to be banned from various sites, it has not succeeded. The result is Canadian players now have a major edge. At least four times in the past five years, US lawmakers have tried to in some way change the law, but each time they have been stymied and stifled.

Another result of the raids on certain poker sites and the subsequent banning of American players is that [geolink href=”https://www.pokernewsreport.com/us-poker-sites”]poker sites that still are accepting US players[/geolink] have all stepped up efforts to attract US players looking for a cash game or tournament. If you want a game and you live in the United States, you can still find them online.

One service that has seen a bump in activity is Western Union. Online poker sites will gladly take deposits sent via Western Union. These deposits are virtually impossible for the US government to stop. There are a few down sides associated with using the service. First, it takes a few days for the cash to be credited to your poker account. Plus, you need to confirm it via an online code. Also, minimums are higher than other forms of money transfer–$100. Finally, it does cost cash to use the service. Many online providers of money transfer services are free or carry a very low fee. Western Union is more expensive than most.

Still, if you are an American and want to sit at an online poker table and play for money, the good news is there are choices. Unfortunately, there are fewer choices than there were just four weeks ago. Everyone is adjusting to the new world of online poker in the States and waiting to see what the next move will be.