PokerStars fired back against the AGA’s attempt to block their purchase of the Atlantic Club casino by writing a letter to New Jersey gaming regulators. 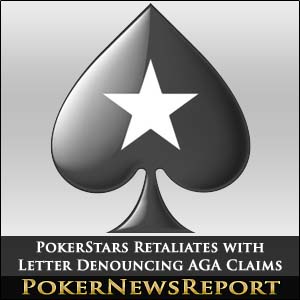 PokerStars fired back against the AGA’s attempt to block their purchase of the Atlantic Club casino by writing a letter to New Jersey gaming regulators.

The AGA’s petition went so far as to say that PokerStars, who continued servicing the U.S. online poker market after passage of the UIGEA in 2006, operated as a criminal enterprise for a number of years. Attorneys for PokerStars’ parent company, Rational Group, responded with a 15-page letter of their own that questions why the AGA would be allowed to get involved in the matter. Rational Group denounced the AGA’s legitimacy in filing its petition.

PokerStars requests that the Casino Control Commission deny the AGA’s petition and permit expert New Jersey regulators to determine the suitability of who should or should not recive a casino license. The world’s top poker site argues that it would be detrimental to allow the AGA to have a say in the licensing process, as that organization is merely concerned with eliminating competition to its members for purely economic reasons.

The battle wages on. Despite PokerStars’ flouting of the UIGEA, the company did gain an incredible amount of respectability by purchasing the assets of Full Tilt Poker from the DoJ last year and allowing millions of dollars to be returned to rest-of-world players. U.S. players will also be reimbursed, although the DoJ is handling the remission process with funds provided from PokerStars’ acquisition and is moving painstakingly slow.

Keep in mind that PokerStars admitted no wrongdoing in the case. They also received the DoJ’s blessing upon acquiring Full Tilt, with the DoJ stating that, PokerStars is prohibited from offering online poker in the U.S. for real money unless and until it is legal to do so under U.S. law.

It will be up to the Casino Control Commission to decide if they will take the AGA’s petition under consideration when determining if PokerStars will be a suitable owner of a New Jersey casino. But with the bad actor clause removed from New Jersey’s online gambling statute and Gov. Chris Christie intent on restoring profitability to Atlantic City casinos, odds seem in favor of PokerStars coming out on top of this battle.