After failing to acquire the Atlantic Club and receiving a suspended review of its license application in New Jersey, PokerStars is still eyeing the US market. 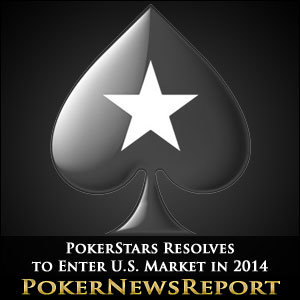 After failing to acquire the Atlantic Club and receiving a suspended review of its license application in New Jersey, PokerStars is still eyeing the US market.

The world’s leading poker site hasn’t ruled out eventual entry to the U.S. via the Garden State. However, PokerStars’ Head of Corporate Communications Eric Hollreiser indicated on an end-of-year corporate blog post that if things don’t work out in New Jersey, perhaps another state seeking the benefits of being home to a world-class online gaming company would roll out the welcome mat in 2014.

Hollreiser’s statement came on the heels of the Atlantic Club being sold to Caesars and Tropicana for $23.4 million at an auction necessitated by Chapter 11 bankruptcy proceedings. The casino will not reopen, putting roughly 1,800 employees out of work.

But what’s done is done, and Atlantic City will have only 11 casinos come January 13. PokerStars is saddened by the events that occurred that will see the Atlantic Club shut its doors and laments the fact that its planned investments in New Jersey’s economy have been dashed.

But the future remains bright for the top dog in online poker and its goal of entering the U.S. market remains intact. Despite the setback in New Jersey, Hollreiser stated that PokerStars is confident that the company will establish a U.S. presence in 2014 that will bring with it a positive economic impact.

As the new year begins, it’s not clear where that presence might be. Illinois, Pennsylvania and California are some of the states where lawmakers are considering online poker and gambling legislation. Some industry observers are predicting a domino effect of legislative approval among states after revenue dollars are tallied in New Jersey.

There is no debating the fact that PokerStars is an industry leader, as Hollreiser points out. Some of its business practices in the U.S. have been questioned, such as allegedly flouting the UIGEA and company founder Isai Scheinberg failing to answer to Black Friday charges. But the more states that come to enact online poker legislation in the future, the greater the odds that those practices will be overlooked by at least one state wanting to significantly boost their economy.