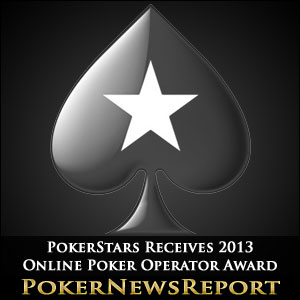 Online poker operator, PokerStars, was awarded the prestigious Online Poker Operator of the Year award at the 2013 International Gaming Awards (IGA) ceremony on February 4. Held in London, PokerStars won the award over 14 other nominees for the category in the 6th annual IGA.

This has been a year of great achievement for PokerStars, and this award is recognition of the hard work and dedication of our employees around the world who are setting the standard for quality in the industry,

In 2012, PokerStars expanded their offering with the launch of new regulated licenses in Malta, Denmark and Spain. In addition, PokerStars acquired Full Tilt Poker and resolved their legal issues in the US. They have worked to introduce new audiences to poker, which they have achieved through Rafa Nadal.

PokerStars introduced a number of new features and functions to improve their player’s experiences. These included Zoom Poker which offers faster and smoother players experiences and Boom!, giving players the ability to share poker hands to social media networks with ease.

Finally, the PokerStars Mobile app now allows players to enjoy the best of PokerStars on the go, from the palm of their hand via their mobile device. The mobile app is available for players using iPhone, iPad, iPod Touch and Android mobile devices.

Launched in 2001, PokerStars has grown to have more than 50 million registered users and has dealt more than 90 billion hands. [isGeoAllowed]If you are not playing at PokerStars yet, check out our [geolink href=”https://www.pokernewsreport.com/pokerstars”]2013 PokerStars review[/geolink] and start today.[/isGeoAllowed]