PokerStars has pulled its casino product from its Spanish poker client, claiming that a technical issue needs to be fixed in order to meet regulations. 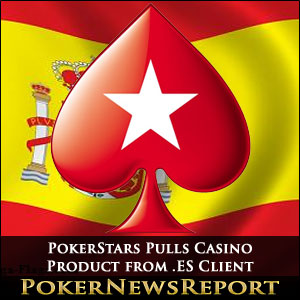 PokerStars has pulled its casino product from its Spanish poker client, claiming that a technical issue needs to be fixed in order to meet regulations.

Back in October, PokerStars.es was the first PokerStars domain to offer real money casino games in its poker client. Heralded as the best way to remain as the number one poker operator in Spain, the micro-stakes blackjack and roulette tables have attracted a limited number of players away from the poker action – particularly during off-peak hours.

However, entry into the online casino market has not been a spectacular success for PokerStars. Usually no more than a handful of players are at the tables and – with no casino welcome bonus or ongoing casino loyalty program in place – the world´s largest online poker company has failed to attract players away from other online casinos in Spain.

Last week, PokerStars sent an email to all its Spanish online poker players in which the company claimed it was removing blackjack and roulette casino games in order to fix a minor technical issue whereby Blackjack hand histories are not available to all players from directly within the software. Apparently this fix is required in order to comply with Spanish regulations.

Considering that the casino hand history issue has had no negative impact on the playing experience nor the integrity of our games, and that blackjack hand histories have always been available from PokerStars´ customer support on request, it seems unusual in the extreme that PokerStars would take down its entire casino for a matter of weeks – rather than push through a quick software update – considering its considerable technical resources.

Probably. Contrary to the popular belief that the house always wins, there are arguments that could reasonably lead one to believe that PokerStars Casino may never return. The high cost of licensing in Spain, a 25% tax on gross gaming profits and a 1% administration fee on all turnover effectively wipes out the house´s edge -especially when the casino is not bringing in new players.

It´s Only Speculation but …

PokerStars´ late entry into the Spanish online casino might have been intended as a means of remaining the number one poker operator in Spain, but all it seems to have done is contribute to the decline of players competing at the poker tables (down 20% in the past six months).

Although much of the decline can be attributed to Spanish online poker players leaving the regulated market to escape the consequences of Spain´s ludicrous tax laws (higher rake, fewer benefits, personal taxes on net profits), it is conceivable that the PokerStars Casino has become an unjustifiable vertical metric and may not return.

Considering the limited number of players that use the PokerStars Casino (and the more rewarding options that exist elsewhere in Spain), it is not likely to be missed; but, should the casino fail to return to the .es poker client, it will have considerable implications for the company´s plans to introduce a casino product on other domains.

No doubt we shall find out more within a matter of weeks.