PokerStars has released a provisional schedule for its upcoming World Championship Of Online Poker (WCOOP), which is due to take place in September. 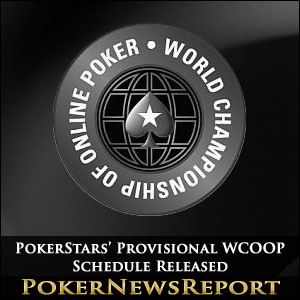 PokerStars has released a provisional schedule for its upcoming World Championship Of Online Poker (WCOOP), which is due to take place in September.

A $215 No Limit 6 Max event is set to kick the WCOOP off on September 8. The two day event will be followed by a $215 No Limit event that will begin later on the same day. A $215 turbo event with rebuys is also set to be held the following day, which will add a little variety to the WCOOP.

Hold’em will not be the only variety of poker that will be featured in this year’s event. A number of Omaha events will also be held, kicking off with a $320 Pot Limit event on the second day of the WCOOP.

Other poker varieties set to be played include Courchevel, with a $215 Plot Limit Hi/Lo event to be held on September 10. Two 7-Card Stud events will also be held in this year’s WCOOP along with two HORSE events.

A $320 Pot Limit Badugi event is also set to be held at the WCOOP as well as a Triple Draw and Single Draw 2-7 events. Razz will also be featured in this year’s festivities, with a $530 Razz event set to take place on September 24.

Those who like a quick game are also in luck as a number of turbo events are set to be held throughout the WCOOP. One of those will be a $320 No Limit event that is set to take place on September 13. A $215 No Limit Turbo Knockout event is also set to take place as is a $215 Pot Limit Omaha event.

While the WSOOP schedule is not fully “set in stone”, it looks to be one of the biggest WCOOPs with a substantial variety of events and formats to take place. Sattelites for events in this year’s WCOOP are due to start from August 8, with a confirmed schedule to be released before then.

Those who wish to full the full provisional WCOOP can do so on the PokerStars website.