PokerStars has launched a series of promotions to raise awareness of the site´s new 3-handed “Spin and Go” games – with more than $100,000 up for grabs! 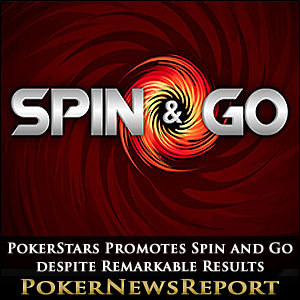 PokerStars has launched a series of promotions to raise awareness of the site´s new 3-handed “Spin and Go” games – with more than $100,000 up for grabs!

“Spin and Go” is PokerStars´ new three-handed Sit n Go game in which players are provided with 500 starting chips to compete against two opponents in a fast-paced hyper-turbo tournament. Buy-ins range from $1.00 to $30.00 and, before each game starts, a random draw (the “Spin”) takes place to determine the value of the prize to the winner.

The prize can be anything from 2x the buy-in to 1,000x the buy-in and, since the launch of the game last week, 787 players have won five-figure sums. Incredibly twenty players have scooped the maximum $30,000 prize for their $30.00 buy-in, with “balsareny88” taking only 229 seconds to dispose of his two opponents to win the maximum amount.

Earlier today (Friday), PokerStars released figures relating to the Spin and Go games that have been player on their .com and .eu sites since the game was first launched on 1st October. Incredibly more than 7.3 million games have been played in the first ten days, with 377 games spinning the 1,000x multiplier.

Despite the remarkable results, PokerStars believe that it is still important to spread the word about their new Sit n Go format, and the site has launched a series of promotions, deposit bonuses and daily challenges that will award more than $100,000 in Spin and Go tickets and cash prizes from now until Sunday October 19th.

How to Play Spin and Go for Free

There are two ways in which players can get free Spin and Go tickets or win cash to enter Spin & Go games:

Full details of the challenges, and the prizes awarded for each successfully completed challenge, can be found on the dedicated PokerStars “Spin and Go” webpage.

Make Sure You Opt In to the Spin and Go Challenges

In order to take part in the Spin and Go challenges, it is important that you “opt-in” to the promotion. PokerStars will remind you to do this as you open the client on your desktop or mobile, but if (like me) you normally click through the ads that appear when first launching PokerStars, a “Sit Go Challenge” tab has been added to the top bar of the poker client.

Simply click on the tab and opt-in to the promotion in order to be eligible for all the challenges, but make sure that you press the “Start” button before starting each day´s challenge or your progress in the challenge will not be monitored and the prize not awarded when you have completed it (and you will have to do it all over again).

If you have any questions about Spin and Go or the daily challenges, please check out their FAQ page, or contact support@pokerstars.com.