Victoria Coren is to marry British television star David Mitchell after the couple took the traditional route by announcing their engagement in British newspaper The Times. 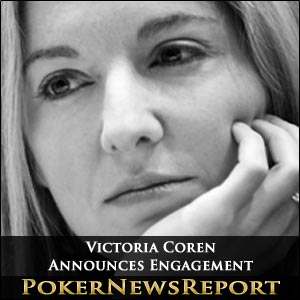 Poker player, broadcaster and author Victoria Coren is to marry British television star David Mitchell after the couple took the traditional route by announcing their engagement in British quality newspaper The Times.

PokerStars Pro Victoria Coren – who in 2006 became the first female to win a European Poker Tour (EPT) event – has enjoyed great success at the poker tables over the years, having also become the first player to take down a televised pro event with that main event victory in London for $941,513 and a televised celebrity event with her win, for $45,403, at Late Night Poker spin-off Celebrity Poker Club back in 2004 in Cardiff.

The 38-year-old Londoner – whose father was renowned journalist and humourist Alan Coren while she is the sister of journalist Giles Coren – appeared with David Mitchell on BBC (British Broadcasting Corporation) quiz programme The Bubble back in 2010 and currently presents another quiz show, Only Connect, for BBC4.

She also saw her poker memoirs – For Richer, For Poorer: A Love Affair with Poker – published to positive reviews back in September of 2009.

Actor, comedian and writer Mitchell will not be so recognisable to many outside of Britain, however, although he is well known to millions as the star of Channel 4 comedy Peep Show, in which he plays the awkward Mark Corrigan alongside Robert Webb.

Additionally, the 37-year-old has appeared regularly on panel shows such as Have I Got News For You, QI, Mock The Week and The Big Fat Quiz of the Year – although it is not known if he is a big fan of poker…or late nights!

Late Nights Might Become the Norm for David Mitchell

He might have to be as Coren has stated that she enjoys staying up late, “smoking and drinking and gambling”, although she added that, as she also likes “cooking and gardening, too”, she sounds like “a very strange mix of an old lady and teenage boy”.

Maybe Mitchell will tame her, but we at Poker News Report certainly hope that isn’t the case as Coren – who regularly broadcasts and writes about the world’s greatest game – is a fun and entertaining player to watch at the poker tables.

Either way, Mitchell also tweeted his appreciation of the many messages of congratulations he received following the engagement being announced in yesterday’s Births, Marriages and Deaths (BMDs) section of The Times.

He wrote: “Having received so many lovely messages today, I’m finally coming round to the idea of the internet. Thank you all. I’m incredibly happy.”

The Forthcoming Marriages section of the newspaper carried this notice: “MR D.J.S. MITCHELL AND MISS V.E. COREN. The engagement is announced between David, son of Mr and Mrs Ian Mitchell, of Oxford, and Victoria, daughter of Dr Anne Coren and the late Mr Alan Coren, of London.”

We at Poker News Report wish the happy couple all the best in the future – but also hope Victoria will continue to appear at poker tournaments for years to come.