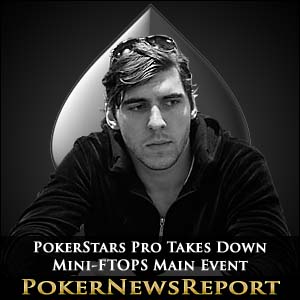 Pessango, who has won more than $2 million playing online poker at PokerStars, achieved the biggest cash of his career when taking down the Full Tilt Poker Mini-FTOPS #35 Main Event. He collected $120,270 after fifteen hours of play and a four-way deal at the final table which saw eventual runner-up “MacMoneysack” collect a bigger prize of $130,000, but not the prestige of being a Mini-FTOPS Champion.

The $75.00 buy-in Main Event attracted 17,578 entrants (many of them multi-entries) who created a guarantee-busting prize pool of $1,230,460 and saw 2,160 players collecting something for their efforts. Although not as stunning a turn-out as pre-Black Friday (when more than 45,000 players took part in the Main Event), the number of players was not far down on the previous RoW Mini-FTOPS Main Event considering that French, Italian and Spanish players are no longer allowed to maintain Full Tilt Poker accounts.

In the two-day event #31, Poland´s Hans HansGusen12 Gusen saw off the twin challenge from Alex AD_84 Debusby and Paul xxxCelticFCxxx Febers, to walk away with $86,176 after a three-way deal; and there were also final tables deals in event #32 – the $22.00 buy-in Stud Hi/Lo event won by lucky_mitras – and event #33, the popular $11.00 Re-Buy Rush Poker tournament which was won in just over eight hours (so, not much rushing there) by German poker player bennerino.

Sunday´s “warm up” to the Main Event was a $26.00 buy-in 6-Max knockout tournament which attracted 14,832 entries. The knocking out went on in event #34 for ten hours until Israel´s pupon emerged victorious and in receipt of $26,536 – again after a final table deal. In total, the weekend´s five tournaments paid out more than $2.2 million to 4,694 Full Tilt Poker players and one Team Online PokerStars Pro (see top).

The climax of the leaderboard competition turned out to be a bit of a disappointment, with only two of the top five players managing to score any points over the weekend. Friday´s leader Ivan “Shepa777 Sheptytskyi managed a twenty-third place finish in Saturday evening´s Rush tournament, and that was sufficient to give the Ukrainian the leaderboard title and free entry to each of the FTOPS XXII events to be played later in the year.