Team PokerStars Online pro Andre “acoimbra” Coimbra is embarking on a unique challenge for 2013 that promises to benefit a worthwhile charity. 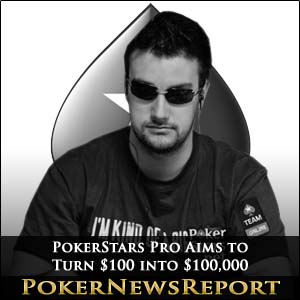 Team PokerStars Online pro Andre “acoimbra” Coimbra is embarking on a unique challenge for 2013 that promises to benefit a worthwhile charity.

Coimbra will attempt to start out with $100 and will compete only in online tournaments with the goal of building up a bankroll of $100,000 by year’s end. Upon completing the challenge, the Portuguese pro plans to donate his winnings to a needy cause.

The first Portuguese player to ever achieve Supernova Elite status at the world’s leading poker site, Coimbra has asked PokerStars to knock his status back down to the Bronze level so that he can set out to attain his goal without an extra advantage, PokerStars reported.

Coimbra became interested in poker following his 2009 pro tour victory in Magic: The Gathering World Championship. Sometimes referred to as MTG, Magic: The Gathering is a trading card game established in 1993 by Wizards of the Coast. MTG can be played online or with a live deck of cards and has roughly 12 million active players as of 2011. The game is a battle between wizards who use various methods such as casting spells to defeat opponents. MTG uses somewhat similar themes as role-playing contests such as Dungeons and Dragons, but its rules are much more complex.

MTG requires both skill and luck, but the element of luck decreases as the game progresses. In making the transition to poker, Coimbra undoubtedly used some of the skills honed while playing Magic and transferred them to the decision-making process required to excel at poker. The 26-year-old is now regarded as one of the best online poker players throughout the world.

PokerStars has also featured Coimbra in a documentary about his poker-playing prowess. In 2012, Coimbra entered each of the 100 MicroMillions II tournaments, so he is certainly no stranger to taking on unique (and perhaps bizarre) challenges. Coimbra plans to update the poker community on his progress via video blogs for the duration of his attempt. PokerNewsReport wishes Coimbra the best of luck in his endeavor.