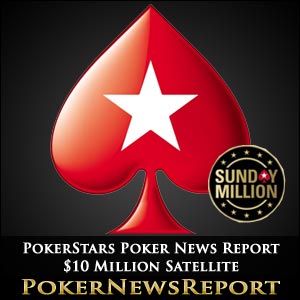 The PokerStars $10 million guaranteed Sunday Million on Sunday December 18th is possibly the most anticipated online poker tournament of the year.

With the potential to break the record for the largest ever online poker prize pool of $12 million set in the World Championship of Online Poker in 2010, and award the most valuable single first prize ever (currently $2,278,097.50), this is the tournament that everybody is aiming to enter. Now YOU can win your seat for the $215.00 buy-in event courtesy of Poker News Report.

Poker News Report is hosting its very own private satellite tournament on the PokerStars site this coming Sunday November 20th at 14.00 ET (7.00pm GMT/8.00pm CET) with one seat added to the prize pool for the PokerStars $10 million guaranteed Sunday Million. This satellite tournament is exclusive to readers of Poker News Report who use the password PNREPORT to enter and pay the $5.50 buy-in. Cash prizes for the tournament will also be awarded in line with PokerStars regular payout table so, should 50 players enter the tournament, everybody who reaches the final table will cash – with the winner receiving $150.00 PLUS an entry to the $10 million guaranteed Sunday Million.

Fantastic Opportunity to Satellite Your Way to $10 Million Event

Whereas most of PokerStars own low buy-in satellites into the feature tournament are geared via the Mega-Satellite on December 11th, or require that you overcome a field of hundreds in a triple shootout, the “PokerNewsReport 10th Anniv Satellite” is a one-off NL Hold´em Freezeout with a 1,500 chip starting stack and 10 minutes blinds. Breaks in the tournament will be synchronised with other PokerStars tournaments, and the Poker News Report 10th Anniversary Satellite is conveniently timed to slot between other feature Sunday tournaments on the PokerStars site.

Where to Find the Poker News Report $10 Million Satellite

The Poker News Report $10 million satellite will be appearing soon in the “Private” lobby of the PokerStars “Tourney” menu. If the tournaments are not displayed in chronological order, click on the “Date” button and scroll down until you reach Sunday´s “PokerNewsReport 10th Anniv Satellite”. Remember, you also need the password PNREPORT to enter the game and pay the $5.50 buy-in (2.75 VPPs are also awarded to each participant in the tournament).

If you do not yet have an account on PokerStars, be sure to click on the link below to download the free software, register your account and take advantage of the PokerStars 100% first deposit match.