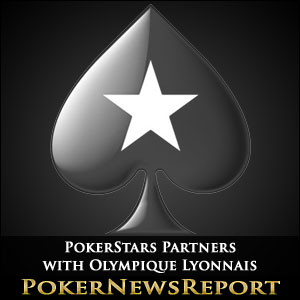 The world’s largest poker room will attract fans of this iconic French Ligue 1 football club by creating special tournaments for them, which will be held nightly and with fantastic prizes up for grabs. For example, participants in these PokerStars Olympique Lyonnais poker tournaments can win exclusive signed shirts by team members, access to warm up sessions and, to top it all off, VIP seating at the State de Garland stadium which seats over 40,000 spectators.

The Lyon based football club was formed in 1899 and won its first Ligue 1 championship in 2002. The club then went on to win an incredible seven successive titles, making it an excellent partner for the award-winning PokerStars.

PokerStars to Benefit from FC Deal

PokerStars will certainly benefit from partnering with Olympique Lyonnaise by receiving prominent branding at the State de Gerland. The team is currently in the run to win the Ligue Cup once more and has a huge fans’ base. In fact, it is believed that an incredible 11% of the French population consider Olympique Lyonnaise “their” team, only one behind the country’s most popular football club, Olympique de Marseille.

The director of marketing for the football club, Vincent Baptiste Closon said that digital is a major axis for the development of the club. As such, he said, with online gaming companies being such major players in the world’s digital sector, it was a completely natural choice for Olympique Lyonnaise to partner with PokerStars.

PokerStars has a strong presence in the regulated French gambling market, where it is in second position as the top online poker service provider behind Winamax, a French operator. The deal with the Ligue 1 football team will definitely help PokerStars boost its profile in the French market.