PokerStars Online Ban to Carry Over to Live Events

The Rational Group is cracking down on players who exhibit unsavory behavior online. 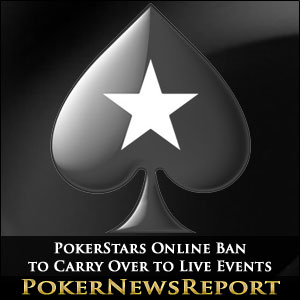 The Rational Group is cracking down on players who exhibit unsavory behavior online.

And who says your online and live personas are two different entities? Not PokerStars. In a recent announcement, a representative of the company confirmed that anyone banned from playing on its site will also be prohibited from participating in its sponsored events, the European Poker Tour included.

According to PokerStars Head of Public Relations Michael Josem, the company’s new policy shouldn’t come as a huge surprise. On a Two Plus Two forum thread, Josem wrote For some time now, we have banned certain players from our live events because of their actions online.

And why shouldn’t PokerStars ban distasteful players from live tournaments, especially if that player’s actions reflect poorly on the PokerStars brand. Since becoming the number one site in the world, PokerStars has expanded rapidly into once uncharted territories, and is now the official sponsor of multiple live tournament series. The new policy is a means of protecting its own interests, and that of its loyal patrons.

In fact, PokerStars emergent policy reflects the demands of its player base. Recently, users of the site’s community forum started a petition, encouraging the company to do more to dissuade cheating. The general consensus was that cheaters and scammers need to be banned from all PokerStars hosted tournaments, and not just ones held online. That said, the poll failed to generate many votes (68), but apparently it had enough momentum to warrant PokerStars attention. 80 percent of those polled voted in favor of banning online cheaters from live events.

It was also revealed that anyone banned on PokerStars also loses their playing privileges on the Rational Group’s other poker offering – Full Tilt Poker. The two sites have shared a blacklist since FTP first joined Rational. Furthermore, players who choose to self-exclude themselves from one site are automatically banned from playing on the other.

To date details regarding how the policy will be enacted are unknown, although the company has stated that in the coming weeks, more information will be become publicly available.

If anything, the recent Borgata counterfeit chip scandal reveals that live tournaments are not impervious to cheaters, despite how many people are watching. Hopefully, by promoting the values of honesty and fair play, PokerStars will strengthen the integrity of the poker community as a whole, in both live and online settings.