Playing poker in the Bahamas must surely be a dream, that fantasy can become a reality with PokerStars’ Mega-Path promotion where you can earn trips to the PCA. 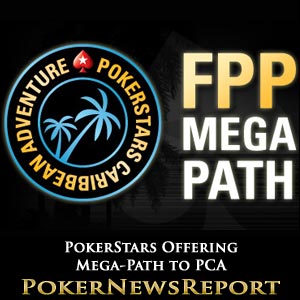 Playing poker in the beautiful Bahamas must surely be the dream of every budding star – and that fantasy can become a reality with PokerStars’ Mega-Path promotion that will see lucky winners earn trips to the PokerStars Caribbean Adventure (PCA) early next year.

Such an incredible prize won’t even cost a cent – or penny – as PokerStars customers can buy in to these qualifiers for just four FPPS (frequent player points), with the chance of earning thousands of dollars at the Atlantis Casino and Resort a real possibility during the January 6 to 15 series.

Just witness the success of English heating engineer and Mega-Path qualifier Steve ‘Roversfan95’ Westlund, who battled his way through eight rounds of satellites over 18 days in May last year to win a $15,000 package to Paradise Island.

That incredible prize was the Lancashire player’s biggest ever, but he wasn’t content to just soak up the sun with his wife Rita during the $10,000 buy-in No-Limit Hold’em main event back in early January.

Oh no! Instead, ex-soldier Westlund – who had gained his spot on the beautiful island for just 70 FPPs by originally taking part in a 10 FPP Mega-Path Round One Turbo rebuy tournament – showed great skill and determination to stay alive for almost four days for an 85th place finish and $25,000.

But he wasn’t Mega-Path qualifier to find success as the combined total for those lucky enough to work their way to main event was in excess of $100,000!

See, it can be done. All you have to do is begin your journey at the Mega-Path FPP satellites – starting at just four FPPs for round one – that are already running at PokerStars, although the complete schedule of 2013 PCA satellites is still be released.

Thereafter, you’ll have to battle through seven more rounds for the chance to secure a place at one of six Mega-Path Finals, with each tournament offering $16,000 prize packages that include the $10,300 main event buy-in, nine nights at the Atlantis, $1,125 room credit to spend on food and drink at the hotel and $1,099 to cover travel expenses.

Of course, you can also buy in at later rounds, if you like, although these events will cost more FPPs.

Either way, Mega-Path satellites will run every day until the end of this year, with a wide range of buy-ins on offer. To locate the qualifiers, log in to PokerStars, click ‘Events’, ‘PCA’ and ‘FPP Satellites’ to begin the journey to a perfect tan (sorry, i couldn’t resist to place this link), pleasure and, of course, poker.

For additional information, check out the PCA website for everything related to the FPP satellites.

Before then, however, several tournaments are planned on various tours over the next few weeks.

The Irish Open started today at Dublin’s Burlington Hotel and features a €3,200+€300 buy-in No-Limit Hold’em main event that begins tomorrow before ending on Monday night, while the Eureka Poker Tour’s first tournament of season two kicks off in Croatia not long after the Emerald Isle festival’s final day commences.

Zagreb’s Golden Sun Casino is the venue for the six-day stop and will feature a €1,000+€100 buy-in main event – which is capped at 400 players – as well as 10 side tournaments, including a €2,000 buy-in High Roller competition. Buy-ins begin from as low as €50 for satellites, so there will be plenty of opportunities to make the big bucks.

Next up will be the £1 million guaranteed UK & Ireland Poker Tour (UKIPT) Nottingham stop, which begins next Wednesday and runs until the 16th at the famous Dusk Till Dawn venue and features a £700+£70 buy-in main event.

As organisers expect a huge field, they have capped the main event at 1,500 entries – which would be a record for a UKIPT field if reached – with three opening-day flights in place to cope with the demand.

For satellite qualifiers – to the main event and several of the side tournaments – get on over to PokerStars, click on ‘Events’, ‘More’ and ‘UKIPT’.

Again, more information relating to UKIPT Nottingham can be found by going to www.ukipt.com/tournaments/nottingham.

The European Poker Tour (EPT) Berlin leg starts up the day before Nottingham finishes, with a €5,000+300 buy-in main event the highlight of the seven-day festival of poker in Germany that ends on the 21st.

Satellites are again running right now at PokerStars, and start from only €1.10, while extra details on the event – including a full tournament schedule – can be located at www.europeanpokertour.com/tournaments/berlin.

Finally, the third stop on the third season of the Estrellas Poker Tour pulls into Ibiza on Monday, May 14, for a seven-day stay as part of Spain’s largest poker tour following events in Madrid and Valencia.

To find out more about the events at the party island, go to www.estrellaspokertour.com/en.