PokerStars Offer Trip Down Under

PokerStars players have the opportunity to win a trip Down Under for performing well in the PokerNetwork League. 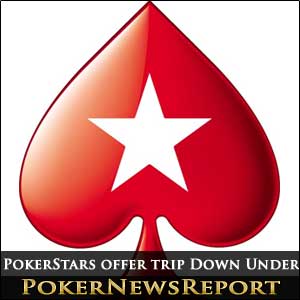 PokerStars players have the opportunity to win a trip Down Under for performing well in the PokerNetwork League.

The poker tournament has been geared towards players in the Eastern Hemisphere, but we know there will be countless poker fans across the globe that are more than willing to endure late nights and early mornings to pick up the top prizes.

So, what’s up for grabs at the poker room? Well, after downloading PokerStars – if you aren’t already a customer with the website – you’ll be able to enter the PokerNetwork League in the hope of securing a place in the $50,000 guaranteed weekly Sunday Cubed events.

But the biggest prize is most definitely the awarding to the overall league winner of an Australia New Zealand Poker Tour (ANZPT) Package for the upcoming Australian event in Darwin.

You will, however, have to sign up to PokerStars as every event possesses an exclusive password – to be made available on the day of each tournament via the PokerNetwork forum.

The leading 27 league players will be automatically registered for the PokerNetwork ANZPT League Final on Wednesday, September 28 (20:00 AEST), with the prize pool seeing the ultimate winner receive an ANZPT Darwin Package for the October 4-8 event, second place picking up $400, third receiving $300, fourth collecting $200, and fifth spot winning $100, with Sunday Cubed tokens also up for grabs.

It should be noted that a cubed event provides three buy-in possibilities, with one rebuy and one add-on also available.

Any player making a final table in the league will score between one and 10 points, while also notching an extra point for every event played.

Additionally, players can choose one of the last four events (August 31, September 7, 14 and 21) to be their Wild Card Tournament, thus allowing a player to score double league points, although you must name your wild card event before it begins on the forum dedicated to the PokerNetwork competition.