It´s been promised as “week´s away”, and then “month´s away”, but now it appears that the approval of a license for PokerStars in New Jersey is “imminent”. 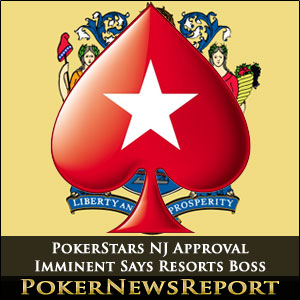 It´s been promised as “week´s away”, and then “month´s away”, but now it appears that the approval of a license for PokerStars in New Jersey is “imminent”.

PokerStars´ imminent approval for an i-gaming license in New Jersey was revealed yesterday by the Company Chairman of the Resorts Casino Hotel – Morris Bailey – during the unveiling of the casino´s new i-Gaming Lounge.

Bailey commented that the New Jersey Department of Gaming Enforcement (NJDGE) is close to finishing the process that would enable PokerStars to start offering online poker in New Jersey and – according to a tweet from the Atlantic City Press – said that he expects to be pleased with the outcome.

It´s Been a Long Time Coming

The Resorts Casino Hotel originally entered into a joint venture with PokerStars in July 2013, and various reasons have been speculated for the delay in issuing a licence – not least that Governor Chris Christie has pulled strings at the NJDGE to delay PokerStars´ licence and to garner favour (and presidential campaign donations) from Sheldon Adelson.

Back in September last year, Senator Ray Lesniak publicly announced he expected the return of PokerStars “within weeks”, but later revised his forecast to March 2015 – neither prediction being accurate. In the meantime, 888Poker and WSOP.com have ganged up on Party Borgata to become the number one provider of online poker in New Jersey – potentially making it more difficult for PokerStars to dominate the market has it has done in regulated European jurisdictions.

Last month – during a first-quarter earnings call – Amaya Gaming´s CEO, David Baazov, increased speculation that the wait for PokerStars´ return to New Jersey was drawing to a close when he said As it relates to New Jersey I would say that we feel that this is coming. We would expect to receive and launch in the next quarter. At the time it was widely reported that Baazov was referring to a third-quarter launch for PokerStars, but this latest news implies that it could come sooner.

A Saviour or Much Ado about Nothing?

Whereas PokerStars´ presence in New Jersey is likely to increase what have so far been disappointing revenues, it is unlikely to set the world on fire. The combined number of players playing online poker during peak hours often fails to exceed 750. The likelihood exists that, when PokerStars is up and running many of its players will be drawn from the existing player pool – making little difference to the overall numbers.

One difference that the arrival of PokerStars will definitely make is the construction of a $10 million poker room at the Resorts Casino Hotel – a promise made by PokerStars when the original agreement was signed, and which is being honoured by the company´s new owners – Amaya Gaming. The new poker room and the Resorts Casino i-Gaming Lounge will definitely improve the experience of playing both live and online poker for players in Atlantic City, but a “saviour” for online poker in New Jersey? Unlikely.

In Other PokerStars News …

Yesterday, PokerStars announced that their online casino now features twenty-seven slots games, plus three new table games – baccarat, “Heads-Up Hold´em” and “Doubleball Roulette”. The new additions to the PokerStars online casino are available for most players using the .com and .eu desktop client, but no changes have yet been made to the mobile PokerStars casino (which currently supports blackjack and roulette).

When PokerStars goes live in New Jersey, players will be able to access casino games through the existing resortscasino.com portal which launched last month. PokerStars agreement with the Resorts Casino Hotel is to provide an online poker product only. Hopefully the wait for the world´s best online poker product to arrive in New Jersey will be over soon.