PokerStars has announced the launch of a mobile app so poker players can still play poker for real money – as long as they have an Apple or Android device. 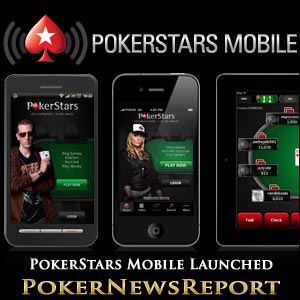 PokerStars has announced the launch of a mobile app so poker players can still play poker for real money – as long as they have an Apple or Android device.

Team PokerStars Pro Liv Boeree – a University of Manchester graduate – said in a statement that “the UK’s largest poker site is proud to launch mobile poker on Apple and Android devices” that will allow many of their 250,000-plus players to gain access to more than 6,000 tournaments at the online poker room.

Now, however, the 27-year-old – whose is nicknamed The Iron Maiden – said PokerStars customers “can play the same full range of Hold’em and Omaha ring games and tournaments that you’d find on the PokerStars desktop software, against the full PokerStars player pool”.

Additionally, the television presenter and model stated that players will “also earn FPPs (frequent player points) in exactly the same way, but you’ll be able to do all this on the go”.

Application Available on iPhone and Android

The PokerStars Mobile Poker App can be used on iPhones, iPads and iPod touches, as well as Android phones and tablets, so allowing players to get in some poker no matter where they are in Britain.

PokerStars also stated that the app “has been designed to fit perfectly on an iPhone or iPad screen, with easy-to-use features like quick seating and multi-tabling”.

Of course, every one of the poker room’s industry-leading features have been made available through the app, with Boeree – the 2010 European Poker Tour (EPT) San Remo champion for $1,698,300 – adding that PokerStars have “also developed some unique features, like 1-Touch Multi-Table”, which allows players to enjoy the “freedom to play more than one table with just a single tap”.

Another helpful feature is the quick seating facility, which stores a player’s “game preferences and takes you straight to the action in just a few seconds” by pressing the ‘Play Now’ button.

Here are some of the other features you, as players, have come to expect at such an innovative poker room…

There will be Hold’em and Omaha tables, so offering these games in No-Limit, Pot-Limit and Fixed-Limit formats, as well as Hi/Lo for the latter variation of the game.

Players can also participate in real money and play money games, allowing novices to up their skill level and get in some vital practice before taking on the likes of Boeree, Daniel Negreanu, Bertrand ‘ElkY’ Grospellier, Vanessa Selbst and Jonathan Duhamel.

There is also access to multi-tabling, the chat boxes and the all-important hand history, while – as players can register for any games or events they like – they will still be able to sign up for anything from freerolls to micro-stakes tournaments and beyond.

Of course, lots of players are keen to research their opponents during games, so PokerStars have also provided a search facility that will allow them to swiftly locate any information they require, as well as find tournaments to check for registration and the like.

Last, but most certainly not least, game guides and tutorials can been accessed via the app – hopefully answering all the many frequently asked questions players, particularly rookies, have in relation to poker.

As PokerStars’ promotional campaign says, ‘We Are Poker’ – and that has never been truer than following the launch of the PokerStars Mobile Poker App.

Underneath is the official press release that we have just received from PokerStars after writing the above news:

PokerStars Mobile is now available to download and play on a wide range of smartphone handsets and tablets, including Apple’s iPhone, iPad and iPad Touch, as well as many Android phones and tablet computers. The poker game app will enable players across the United Kingdom (excl. Northern Ireland) to play both free and real money games on their mobile device at any time.

The trend towards mobile gaming has increased in recent years, as 43% of UK mobile users now have smartphones, according to the 2011 Netsize Guide from Gemalto. Today, there are 25,338,700 smartphone connections and 780,000 tablet PC connections in the UK, and as the market segment grows (expected to surpass 50% this year) so does the demand for great games that are optimized for these increasingly sophisticated devices.

“PokerStars Mobile is more than just the migration of the existing PokerStars game product to the mobile platform,” said Jeffrey Haas, PokerStars Director of New Platforms. “It’s an intentional product designed specifically for the form factors of mobile and tablet devices, and the different ways people play games on them. This is the best authentic poker experience available for mobile devices today.”

The UK launch of PokerStars Mobile follows a highly successful debut in Italy last month. 10% of all PokerStars players in Italy each day now play on mobile, with 7% playing exclusively on mobile devices.

PokerStars Mobile offers Texas Hold’em, Omaha and Omaha Hi/Lo games for real and play money, and players can choose to participate in their favourite multi-table tournaments, sit & go’s and ring games. All mobile players will join the full PokerStars global player pool, with no separation between mobile and desktop players – so you can find the game you want, at the stakes you want, whenever you want it! Just press the ‘Play Now’ button in the app to join the action!

Team PokerStars Pro Liv Boeree said: “PokerStars Mobile is going to transform where and when I play poker – I now have access to the biggest tournaments and all my favourite cash games, even when I’m not in front of my computer. I plan to play all the upcoming UKIPT events and will now be able to play some poker when travelling to or from a tournament.”

One unique aspect of the PokerStars Mobile offering is the pioneering optimization of the multi-tabling user experience for mobile, allowing players to easily join several tables at the same time, with intelligent auto-switch technology and ‘flick navigation’ to ensure that mobile players never miss a hand.

Just like the desktop software, the PokerStars Mobile game lobby has filters that allow players to find all of the available games quickly, along with player and tournament search functions. Players will also earn VPPs (VIP Player Points) and FPPs (Frequent Player Points) in the same way and at the same rate as desktop players.

One Reply to “PokerStars Mobile Poker App Launched in UK”