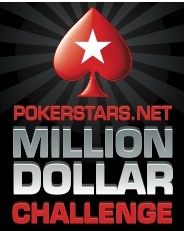 After Season 1 of the PokerStars Million Dollar Challenge proved to be such a success by drawing in an average of 4million viewers per episode, many poker fans will be happy to hear that the poker televsion show will be returning to Fox and airs tomorrow night (19th September). Players who have qualified via satellite tournaments on PokerStars will have the chance to win $1 million just like Mike Kosowski did last series when he defeated Daniel Negreanu by hitting a four-outer on the river.

This series of the Million Dollar Challenge will feature several celebrities who will take part in Round One of the show as ‘celebrity defenders’ and play against the amateur poker players who have qualified while Negreanu sits with them offering the amateurs advice. These celebrities are rumoured to include Sara Jean Underwood (Playboy Magazine 2007 Playmate of the Year and Victory Poker sponsored pro), Gary Payton (future NBA Hall of Fame guard), Brooke Burke (Dancing With The Stars hostess), John Elway (Hall of Famer and two-time Super Bowl champion), Barry Sanders (former Detroit Lions running back and Hall of Famer).

Players then proceed to Round Two where Daniel Negreanu is sent to an isolation booth and the amateur players can only hear is advice as they take on some of the toughest poker players in the world. Professional poker players and Team PokerStars Pros such as Chris Moneymaker, Barry Greenstein, Jason Mercier and Vanessa Rousso are the opponents in Round Two which should be very exciting for the amateur players as well as extremely tough.

Things get much more interesting if the amateur is able to defeat one of the Team PokerStars Pro’s because they will have the choice of walking away with $25,000 or risking it by challenging Daniel Negreanu to win $100,000 and a seat in the Tournament of Champions. If the amateur player does this and proves victorious they will once again face Daniel Negreanu in a heads-up battle for a staggering $1 million.