Poker´s richest low-stakes championships get underway on Thursday, when the cards are in the air for the first of 100 MicroMillions Events on PokerStars. 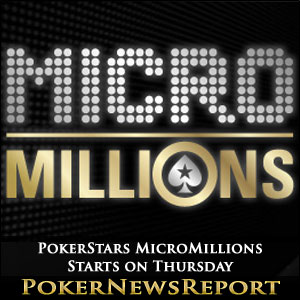 Poker´s richest low-stakes championships get underway on Thursday, when the cards are in the air for the first of 100 MicroMillions Events on PokerStars.

More than $45 million has been paid out in the six MicroMillions series which have been hosted to date on PokerStars, and “MM Series 7” is likely to smash all previous records with one hundred tournaments – guaranteed to pay at least $5 million in prize money – taking place from Thursday.

The feature event in the series is the MicroMillions Main Event (Event #98), which will be played on Sunday March 23rd, has a buy-in of just $22.00, a guaranteed prize pool of $1 million, and the winner guaranteed a minimum first prize of $75,000 – but there is a lot more action happening before then.

Loads of Variety in the MicroMillions Schedule

The series gets underway with a No Limit Hold´em “Hyper-Active” $0.11 re-buy event at 5.00pm (UTC) that is sure to be well supported (and more than a little crazy) as the prize pool is guaranteed for $20,000. Day 1 is completed by five more NL Hold´em tournaments, but other poker disciplines are quickly introduced on Day 2.

Between March 13 and March 23, tournaments will be played in all formats of Hold´em, Omaha and Stud, plus there will be events hosted for players who feel confident in Badugi, Draw and Courchevel. Mixed games also feature in the MicroMillions schedule, with a $3.30 buy-in 8-Game tournament scheduled for March 17, and a $8.80 buy-in HORSE event listed for the following afternoon (UTC).

Players who find NL Hold´em a little too sedate will enjoy the two Hyper-Zoom tournaments included in the schedule and, if you want to try your hand at something completely outrageous, check out the $10,000 guaranteed No Limit 5-Card Omaha Hi/Lo Event on the evening of Saturday 22 March (the full PokerStars MicroMillions schedule can be found here).

One of the best reasons for joining in with the MicroMillions festivities as quickly as possible is to get a head start on the PokerStars MicroMillions leaderboard competition and improve your chances of picking up one of the free 100 leaderboard prizes.

Leaderboard points are awarded to every player who cashes in a MicroMillions event, with the top points earners being awarded these sensational prizes:

PokerStars are also offering every new player $16.50 of tournament tickets for the MicroMillions Series when they register an account with PokerStars and make a deposit of $20.00 or more using the PokerStars Bonus Code “FREE20”. In addition to the MicroMillions tournament tickets, new players will receive $20.00 free poker money and entry into the site´s $100K Privilege Freerolls which take place every day throughout March.

Finally, players looking for a little extra value should note the PokerNewsReport Freeroll which will be hosted on PokerStars on Friday 21 March at 8.00pm (UTC) and which offers 20 free seats into the MicroMillions Main Event.

The tournament will soon appear in the PokerStars lobby, but will be password protected. We will be announcing the password on Thursday 20 March; so, for your chance to pick up a $75,000 prize courtesy of your favourite poker news reporting website, you had better start following PokerNewsReport on Twitter!