PokerStars’ MicroMillions online poker series is approaching its conclusion with well over half the events already staged ahead of Sunday’s $1 million guaranteed event. 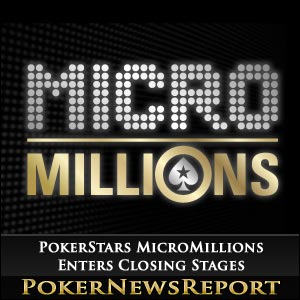 PokerStars’ MicroMillions online poker series is approaching its conclusion with well over half the events already staged ahead of Sunday’s $1 million guaranteed, $22 buy-in main event at the world’s biggest poker room.

There are still 29 events to be staged in the eminently affordable series after today, however, with some incredible prize pools having already been reached during the 100-tournament low stakes festival.

All you female poker players out there should note that the Women’s Sunday tournament marks its one-year anniversary at the poker room this weekend with a double prize pool guarantee special of $20,000 and double bounties of $100 at 14.30 ET (Eastern Time Zone).

Meanwhile, as thousands of players were grinding away at the MicroMillions, the customary Sunday Million and Sunday Warm-Up events at PokerStars continued as usual, with both tournaments offering $215 buy-ins and guarantees of $1 million and $500,000 respectively.

Live Events In Full Swing Across the Globe

For more information, pop on over to www.lapt.com

Also starting yesterday was the French Poker Series (FPS) SnowFest Evian in the French Alps, although the €1,000+€100 buy-in main event only starts today before also concluding on Sunday. There are 13 events in total on the schedule, including a €2,700+€300 buy-in High Roller tourney that stakes place on Saturday at the Casino Evian in the Rhone-Alps.

Finally, for this week, the opening stop of season four on the Australia New Zealand Poker Tour (ANZPT) kicks off in Sydney today at the Star Casino with an AUD$2,000+AUD$200 buy-in main event that ends on Sunday, as well. As always, more information can be found by visiting www.anzpt.com/tournaments.