PokerStars MicroMillions is Back on November 6 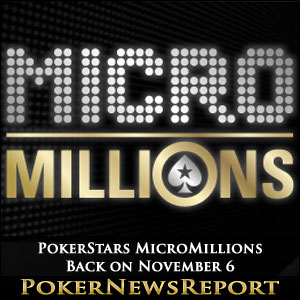 PokerStars MicroMillions explodes into life on Thursday November 6 with its traditional $0.11 buy-in “Hyper-Active” Event #1 and then continues around the clock for the next eleven days – distributing millions of dollars to thousands of players.

The feature event of MicroMillions 9 is the $22.00 buy-in Main Event (Sunday November 16 @ 14:30 ET), which has a $1 million guaranteed prize pool and assures the winner will collect at least $100,000. However, there are a number of interesting events running up to the Main Event which are certain to catch the imagination of online poker players around the world.

The 100 tournament series has been designed to test poker players´ skills to the maximum, with the schedule including multiple disciplines (NLHE, Omaha, Stud, Mixed etc) over various formats (6-Max, KO, Big Antes etc) at several speeds (Turbo, Hyper-Turbo etc). However, there are certain tournaments which stick out as being particularly attractive.

Almost $2 Million Up for Grabs on Final Weekend

Twenty events are scheduled over the final weekend of MicroMillions 9 which – including the $1 million Main Event – have combined guaranteed prize pools of $1,955,000. As well as special editions of the Saturday Splash and Sunday Storm, there are also a $1.10 re-buy Sunday Spark (guaranteed for $40,000!) and a $2.22 buy-in heads-up hyper turbo which has a prize pool of $20,000.

Even once the Main Event has got underway, there are still two valuable MicroMillions events scheduled – a $3.30 NLHE tournament with a $40,000 guarantee and a $1.00 re-buy hyper-turbo that has a minimum of $30,000 up for grabs. Details of the full schedule, times and buy-ins can be found on PokerStars´ dedicated MicroMillions web page.

Every player that cashes in a MicroMillions tournament is automatically going to be awarded points towards the MicroMillions leaderboard competition, which rewards the most consistent 100 players with tickets for PokerStars´ Sunday Millions tournament (the winner of the leaderboard competition receiving entry into the Sunday Millions for six months!).

The competition winner in the previous MicroMillions series was Russian player “Inyzh”, who amassed a colossal 495 points due to cashing in forty-one events. However, due to the way in which points are awarded for this series, it might only take a handful of final table appearances for a winner to be determined – although that is no easy ask in such big fields!

MicroMillions 9 starts two weeks from today and satellites to the higher buy-in events are already running on PokerStars.