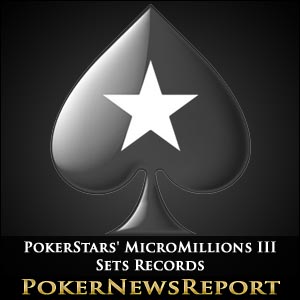 A total of 1,308,994 entries were recorded during the 11-day duration of the event that consisted of 100 tournaments with buy-ins as low as 11 cents. MicroMillions III became the most-played poker festival and paid out a whopping $8,276,083.13, which shattered the guaranteed prize pool of $5 million.

The inaugural MicroMillions series in March attracted 1,294,889 buy-ins and July’s MicroMillions II saw 1,288,221 entrants participate. The most expensive of the tourneys for MicroMillions III was Sunday’s Main Event that required a $22 buy-in. A total of 61,072 ponied up the cash for a prize pool of $1,221,440, well above the $1 million guarantee.

The final table deal saw the second and third place finishers, Senter268 and numeromis, walk away with $105,000 and $125,000, respectively. Both hail from the Czech Republic. Although not in on the deal-making, fourth place finisher supersimu from Switzerland accomplished the dream of perhaps every low-stakes grinder. Supersimu qualified for the Main Event by way of a 350 Frequent Player Points (FPPs) satellite. His (or her) account balance is $55,233.51 richer as a result, attaining an ROI of 986,213%.

Another notable achievement in MicroMillions III that ran from Nov. 15 – 25 went to Team PokerStars Pro Marcin Goral Horecki, who cashed in 34 of 100 series events to win his second MicroMillions Player of the Series title. He also accomplished the feat in MicroMillions I. I did it again! Micro Millions III TLB Winner! Thanks to all my opponents for an exciting fight! Horecki tweeted. Understandably, Horecki needs a break from his marathon online play, as he also took to Twitter to say, I promise to you and to myself… I will not play MM IV for TLB! Its such a grind! ;) In addition to a trophy, Horecki won a $16,000 PokerStars Caribbean Adventure package.