The 8th Series of PokerStars´ MicroMillions gets underway next Thursday (17th July), with one hundred events guaranteeing more than $5 million in prize money 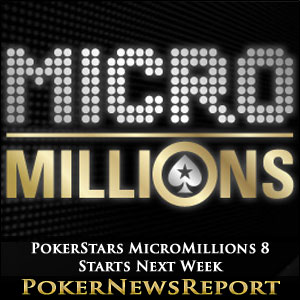 The 8th Series of PokerStars´ MicroMillions gets underway next Thursday (17th July), with one hundred events guaranteeing more than $5 million in prize money

The biggest online poker tournament series for the “small guy” hits the virtual felt next week, with massive prizes available for miniscule buy-ins, and a new MicroMillions Challenge in which players can win up to $3,000 even if they fail to cash in any of the feature tournaments.

A comprehensive range of poker disciplines are included in the schedule (which can be found on the [isGeoAllowed room=”pokerstars”]PokerStars website[/isGeoAllowed][isNotGeoAllowed room=”pokerstars”]PokerStars website[/isNotGeoAllowed]) including the popular progressive KOs – in which players can enhance their winnings even more by knocking out their opponents – shootout events and turbo Zoom tourneys.

Each of the PokerStars´ MicroMillions tournaments offers guaranteed prize pools, buy-ins from as little as $0.11 and the chance to win a life-changing amount in the $1 million guaranteed Main Event. The series kicks off with an $0.11 rebuy “hyper-active” event, but within an hour players who prefer more sedate poker will be pleased to find a $11.00 buy-in “regular” NL Hold´em tournament with a $150,000 guaranteed prize pool.

The feature event of the first weekend is a special edition of the Sunday Storm ($300,000 guaranteed for an $11.00 buy-in), but even before then there are several events carrying guarantees in excess of $100,000 – including a 6-Max NL Hold´em tournament on Friday 18th July (Event #11) and a $2.22 triple-turbo re-buy event (Event #20) the following afternoon.

The MicroMillions Main Event (Event #98) takes place on Sunday 27th July at 14:30 (ET) and has a guaranteed prize pool of $1 million – with a minimum of $100,000 being awarded to the winner (subject to final table deals). Based on last March´s equivalent event – when 63,237 players entered the event to create a prize pool of $1,264,740, it promises to be a whopper tournament (8,097 players cashed in the MicroMillions 7 Main Event) and satellites are already underway in the PokerStars client.

Players who have competed in 6-9 tournaments will be given a ticket to an “All-in Shootout” with a prize pool of $15,000 which will take place on August 2nd at 14:05 (ET), with a $30,000 tournament for players who have taken part in ten or more events starting an hour later. Please note that players are not automatically entered into each shoot-out tournament, and unused tickets will be forfeited.

To take part in the MicroMillions Challenge, players have to opt-in to the promotion. This can be done by entering the Star Code “MM8” in the Account section of the PokerStars client (top left-hand corner) or, on mobile devices, by going to the “Settings & Tools” > “Account” section and entering the Star Code there. Players have until 23:59 (ET) on July 27th to opt into the MicroMillions Challenge, and all MicroMillions events played by then will count towards what Shoot-out ticket is allocated.