Hoping to establish a presence in the U.S., PokerStars has reached an agreement to acquire the Atlantic Club Casino Hotel in Atlantic City, New Jersey. 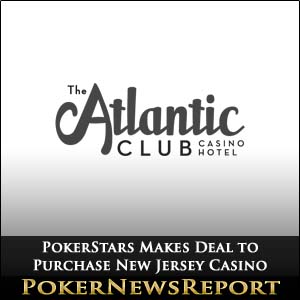 Hoping to establish a presence in the U.S., PokerStars has reached an agreement to acquire the Atlantic Club Casino Hotel in Atlantic City, New Jersey.

Though financial details have not been released, its been confirmed that the Rational Group, parent company of [geolink href=”https://www.pokernewsreport.com/pokerstars”]PokerStars[/geolink] and Full Tilt Poker, has made a deal with Resorts International Holdings to acquire the floundering casino. The Isle of Man-based Rational Group has filed the necessary paperwork with the New Jersey Division of Gaming Enforcement requesting approval to take over ownership of the Atlantic Club, the press of Atlantic City reported.

PokerStars’ interest in the land-based casino was first revealed last month, just prior to the New Jersey state legislature’s approval of online gambling regulations. That legislation was modified to remove a bad actor clause that would have prohibited online poker sites such as PokerStars that continued operating in the U.S. following passage of the Unlawful Internet Gambling Enforcement Act in 2006 from being able to offer online services in the state. That bill now sits on the desk of Gov. Chris Christie, awaiting only his signature to become law. He has until Feb. 4 to make a decision.

The Atlantic Club has been losing millions of dollars and the bailout by PokerStars could allow the casino to become viable and profitable once again. PokerStars facilitated the bailout of another beleaguered company last year when they agreed to purchase Full Tilt Poker and pay back players who had money frozen on the site. That acquisition seems to be going well, as Full Tilt has regained its number two ranking of online poker sites in terms of cash game player traffic. U.S. players have yet to be reimbursed, but that is the fault of the U.S. Department of Justice, who insisted on assuming the reimbursement duties for American players and have been extremely slow in establishing a remission process.

The Division of Gaming Enforcement has 90 days to investigate the purchase agreement between Rational Group and Resorts International and is required to file a detailed report with the Casino Control Commission. Another 30 days are allowed for the commission to schedule a hearing and make a final determination.

Atlantic City casinos have seen declining profits for the past six years, mainly due to competition from casinos in Pennsylvania. It is difficult to envision the commission not approving the sale of the Atlantic Club to the Rational Group. PokerStars would undoubtedly make necessary changes to bring stability to the struggling brick and mortar casino, and at the same time, allow roughly 2,000 workers to remain employed. But perhaps more importantly to PokerStars, it would allow the world’s top site to enter the U.S. online poker marketplace if Gov. Christie decides to sign the bill permitting online gambling in the Garden State.