In a severe blow to its desire to enter the U.S. online poker marketplace, a judge ruled against PokerStars in its bid to buy the Atlantic Club casino. 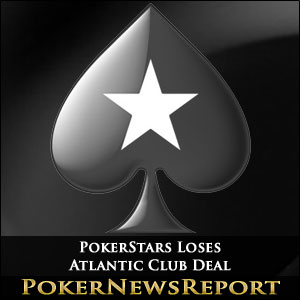 In a severe blow to its desire to enter the U.S. online poker marketplace, a judge ruled against PokerStars in its bid to buy the Atlantic Club casino.

Judge Raymond Batten ordered the temporary restraining order (TRO) that prevented the casino from entertaining other offers for the property to be lifted, allowing its owners to pursue better deals. Batten had issued the TRO following an emergency motion filed by PokerStars roughly two weeks ago.

In Friday’s ruling, Batten sided with Atlantic Club casino attorneys who argued that the agreement signed by the parties required PokerStars to secure a casino operating license by April 26. That license has not been issued and a decision on the matter by New Jersey gaming officials is not expected until August. That provision permits the Atlantic Club to terminate the acquisition agreement, Batten said.

PokerStars had argued that $11 million has already been paid to the casino toward the $15 million purchase price since December to keep the struggling casino operating. But that argument did not sway the judge, who agreed with an Atlantic Club lawyer who said that PokerStars was attempting to rewrite the contract, the Associated Press reported.

The world’s top-ranked poker site also had agreed to eventually pay $32 million toward a deficit in a pension fund of casino employees, as well as investing millions more after taking over the brick and mortar operation. The $11 million already paid will apparently be written off by PokerStars as the risk involved in trying to enter the newly-regulated online gaming market in New Jersey.

The Atlantic Club insists that PokerStars must also pay a $4 million termination fee as stipulated to in the purchase agreement. This may likely lead to further litigation, with PokerStars not at all pleased at having lost its $11 million investment.

The New Jersey casino is now free to accept bids from other buyers. Although the Atlantic Club has been struggling to become profitable for years, the state’s online gambling legislation enacted in February has allowed the land-based casino to gain value. Though no new suitors have been mentioned, it is believed that a number of gaming companies will express interest in acquiring the Atlantic Club.

Following the ruling, PokerStars’ spokesman Eric Hollreiser said that the company is reviewing the judge’s decision and remains commited to the Garden State gaming market. New Jersey is poised to enter the online gambling arena in November with Internet poker and a full slate of casino games.