Just 10 days after sister site Full Tilt rolled out Lottery SitnGos, PokerStars has launched a version available on its ring-fenced offering in Spain. 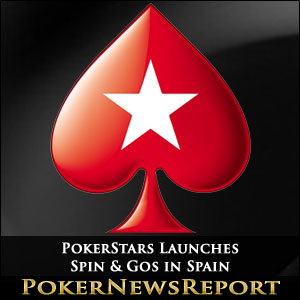 Just 10 days after sister site Full Tilt rolled out Lottery SitnGos, PokerStars has launched a version available on its ring-fenced offering in Spain.

PokerStars.es has dubbed its winner-take-all, three-player, fast-paced, jackpot-style game “Spin & Go,” which copies somewhat the name created by iPoker for its version known as Twister Poker. The innovative concept was first introduced by Winamax.fr in 2013 under the title Expresso Poker. Full Tilt uses the name Jackpot Poker.

Spin & Gos are available at four different buy-ins, either €1, €2, €5 or €10. The game begins once three players register, with each receiving only 500 in starting chips under a hyper-turbo structure.

While the prize pool for a single winner is most often 2x the buy-in fee, there are eight (8) different jackpot prize pools available. Those prizes are randomly selected and can go as high as 1,000x the entry fee, which happens four times every 100,000 games.

In other words, players are playing for prize pools that are 2, 4, 6, 10, 25, 100, 200 or 1,000 times a single buy-in fee, with the probability of landing at higher jackpot tables progressively less than the smaller prize pools. A full 75% of the time, the prize pool for each game will be only 2x a single buy-in.

The concept has achieved a certain degree of popularity due to its fast-paced action and a shot at a large prize for a single winner. Online players have been drawn to poker played at speeds greater than the norm during live contests, as is evidenced by the proliferation of fast-fold poker first introduced by Full Tilt with Rush Poker in 2010 and later mimicked by just about every other major poker room and network.

The payouts among Expresso, Twister, Jackpot and Spin & Go vary slightly, with Full Tilt going so far as to offer jackpots at 2000x a single buy-in. However, the concept is basically the same among the four offerings.

PokerStars has yet to announce whether Spin & Gos will also be made available on its global poker site offering, but odds are good that the new game will indeed find its way to dot-com. As of now, Spin & Gos are available only at PokerStars.es, with an enticing marketing pitch that states 3 players, 1 spin, win up to €10,000 in 5 minutes.