PokerStars have added another product to their repertoire of unique tournament formats with “Phased Tournaments” – events played over two different days. 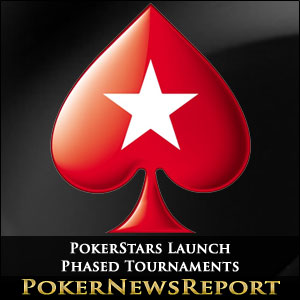 PokerStars have added another product to their repertoire of unique tournament formats with “Phased Tournaments” – events played over two different days.

Players who have logged into their PokerStars´ accounts over the past couple of days may have noticed a new addition to the tournament lobby – “Phased Tournaments”. Phased tournaments are also more accurately known as “Flighted Tournaments” and involve players competing in a “Day 1” opening flight, before carrying their chip stacks forward to a “Day 2” conclusion.

PokerStars first Phased Tournament starts next week, and is an $11.00 buy-in event which has a $5,000 guaranteed prize pool; and there are plenty of added-value satellites scheduled for players who would like to qualify their way into a phased tournament on the cheap to try it out.

Each Phase 1 will last nine 8-minute levels (late registration is available for just three levels) and players will receive 5,000 starting chips with a kind blind structure starting at 5/10. Players who survive each of the “Phase 1” tournaments carry forward their chip stack into the finale of the event, but only one chip stack per player is allowed (the first, even if players have improved on that in later phase 1s).

Phase 2 starts at Level 10, with blinds of 200/400 (ante 50) and continue, with blinds rising every 8 minutes, until a winner is found. PokerStars normal payout structure will apply, but there is no guarantee that players surviving into Phase 2 will cash in the event.

Players can enter as many Phase 1s as they wish (provided that they have not already survived one with a chip stack to carry forward) and this is going to lead to some serious betting strategies towards the end of each opening flight, as players try to gain an advantage going into Phase 2.

As Brad Willis suggests on the PokerStars Blog Go Big or Go Home Blue Beard will be the nature of the day in the last level of each Phase 1 with the potential of turning a relatively small buy-in into a $1,000 first prize. Here at PokerNewsReport, we would suggest going into Phase 2 with any less than 10,000 chips (20 Big Blinds) might result in ultimate disappointment.

Where to Find PokerStars Phased Tournaments

Each of the opening flights of PokerStars Phased Tournament #1 has a different tournament ID assigned to it (ranging from 904145695 to 904145712) so it is easier to go into the tournament lobby, select “All”, and then type “phased” (with an “s”) into the search box just above where the tournaments are listed.

At present, the filter will show a list of satellites into Phase 1 of the tournament – starting from just 5 FFPs or $2.20 – each of which guarantees seats into the player´s choice of Phase 1. Expect the direct buy-ins to appear over the weekend, and the early Phase 1s of the tournament to rapidly fill up.