The battle against Germany´s “chaotic and complex” anti-online gambling laws found a new ally this week in the shape of the world´s largest online poker site. 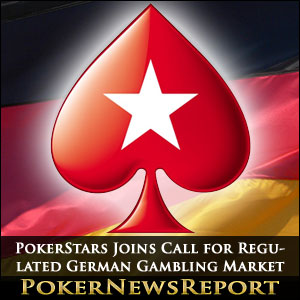 The battle against Germany´s “chaotic and complex” anti-online gambling laws found a new ally this week in the shape of the world´s largest online poker site.

Germany´s current online gambling legislation prohibits practically every form of Internet action with the exception of horse-racing and a handful of online sports betting licences that were handed out to appease the European Union in 2012.

According to a [geolink href=”http://www.pokerrealmoney.com/online-gambling-sites-withdraw-germany/” target=”_blank”]report in pokerrealmoney.com[/geolink], the restrictive legislation and the fines recently imposed on a German resident for online gambling were responsible for the departure of five online casinos from the German market at the beginning of the month, in addition to BetFred and Betfair saying “auf wiedersehen” in July last year.

Described as chaotic and complex by the German Association of Telecommunications and Media (Deutsche Verband fur Telekommunikation und Medien/DVTM), Germany´s anti-online gambling laws are based on the 2008 Interstate Treaty on Gaming – a federal Act to protect the country´s lottery monopoly which was successfully challenged in the European Court of Justice.

To appease the EU´s judges, Germany issued twenty online sports betting licences in 2012 – the same year that online gaming was temporarily legalised by the state of Schleswig-Holstein. Twelve months and a change of government later, the northern German state repealed the pro-online gambling legislation and, once again, most forms of online gambling in Germany were prohibited.

PokerStars Speaks Out at DVTM Dinner

The DVTM is one of the leading campaigners for a repeal of the Interstate Treaty on Gaming and the introduction of a regulated online gambling market. This week the association invited forty industry experts to its 7th Annual Executive Dinner in Munich to discuss topics such as the development of online poker in Germany.

Among the guests was Eric Hollreiser – Amaya Gaming´s Head of Communications – who was representing the latest member of the DVTM, PokerStars. PokerStars has continued to provide an online poker service to Germany despite it being illegal for German players to play on the world´s largest online poker site. Hollreiser had this to say about his company´s purpose for joining the association:

The legislative situation in Germany calls on industry to take action. The industry can only work together to develop an effective impact and we very much hope that other companies will follow suit and join the association. The common goal is a consumer-oriented, legally compliant and EU compliant regulation of the German online gaming market.

In the context of the dinner, Eric Hollreiser´s comments sent a strong message to German lawmakers that PokerStars and the DVTM are committed to striving for a legally recognised and EU compliant online gaming environment. Most industry spectators acknowledge that a considerable amount of thought goes into anything officially broadcast by PokerStars or its agents – hopefully the German authorities acknowledge that too!

Attack on German Law from an Unlikely Source

Whereas PokerStars´ call for a regulated German online gambling market could be described as subtle, a less discrete attack on the 2008 Interstate Treaty on Gaming came from a UK Member of the European Parliament (MEP).

John Agnew has tabled a question to the European Parliament asking why Germany had failed to prove how its online gambling laws were compliant with the EU Article 49 (movement of free trade) before the cut-off date of 1st July 2014.

The UKIP Minister for the East of England asked if the Commission now considered the Interstate Treaty on Gambling compliant with EU legislation and, if not, why the Commission had not taken action by means of an infringement procedure.

The question requires that a written response is received from the EU Commission; and, although John Agnew´s motives for tabling the question may have little to do with regulating online gambling in Germany, if the German authorities fail to read between the lines of Eric Hollreiser´s comments, maybe this will sting them into action.