PokerStars’ purchase of the Full Tilt assets included Rush Poker, the fast-fold creation that PokerStars copied with Zoom Poker, but now is hoping to protect. 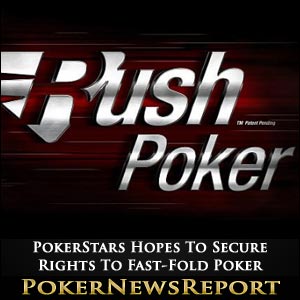 PokerStars’ purchase of the Full Tilt assets included Rush Poker, the fast-fold creation that PokerStars copied with Zoom Poker, but now is hoping to protect.

When Full Tilt’s Rush Poker hit the market in 2010, the concept that brought fast-fold poker to the Internet was seen as amazingly innovative, allowing players to play much more quickly without having to do a lot of the waiting around that is typical in playing poker.

Fast-forward to the fall of 2012 and the market is now flooded with fast-fold variants on a number of websites, including Zoom Poker at PokerStars, Blaze Poker on the Microgaming Network, Speed Hold’em at iPoker, Relax Gaming’s Fast Poker, FastForward at PartyPoker, and InstaDeal’s version via the Terminal Poker skin.

Prior to Black Friday and Full Tilt’s eventual shutdown–when Rush Poker was the lone fast-fold game on the market–the company had applied for patents in a number of global markets in order to protect their product from being copied. Full Tilt filed documentation in patent offices in the United States, Canada, Europe and Australia, hoping to secure the rights of marketing their innovative software invention. At the time, the company stated that Full Tilt Poker, its Affiliates and/or its Parent Company will take vigorous legal action against any infringement of their patent rights.

The aftermath of Black Friday and the Full Tilt shutdown saw other sites attempt to fill the void in the marketplace left by Full Tilt and create their own fast-fold versions. InstaDeal Poker Network got things rolling with their fast-fold variant in late 2011 with chairman Per Hildebrand believing that the Rush Poker patent was not enforceable as company lawyers informed him that Rush Poker only met one of the three criteria required to be granted a patent, Hildebrand said.

From that time on we were confident they were never going to get a patent for it and so we felt it was safe to start moving forward with InstaDeal, Hildebrand added.

PokerStars’ attorneys evidently came to the same conclusion, as the world’s top poker site came out with Zoom Poker earlier this year–prior to their purchase of Full Tilt–and now enjoy even greater success in dominating the online poker market. Recent estimates have been reported stating that one-fourth of all online poker hands are of the fast-fold variety.

Which prompted Hildebrand to say that the funny part is that their [PokerStars] lawyers once must have concluded that the product is not patentable as they launched Zoom and now want to argue that it is.

So the question now is, can the Rush Poker creation be patented? If a court found that to be the case, it would mean that all the other fast-fold variants in the industry would not be allowed to use their software and Full Tilt/PokerStars could corner the market. However, the process in obtaining a patent typically takes a number of years just to meander through the rigamarole of the Patent and Trademark office. Add to that the anticipated time that lawsuits and appeals would take in federal courts if such a patent were granted and its logical to assume that the fast-fold variations found on a number of poker sites and networks are not going to disappear anytime soon.

So PokerStars will now take up the fight to preserve the intellectual property of the creative software invention known as Rush Poker. But the decision of whether or not Rush Poker is patentable will be anything but rushed, as PokerStars has already slowed down the wheels of progress by filing a motion to postpone oral proceedings in the European Patent Office, citing the fact that the company only got involved in the matter several weeks ago via its purchase of Full Tilt.