A PokerStars exec said the online poker site is highly credible and anticipates entering the U.S. market in a state-by-state or federal format in the future. 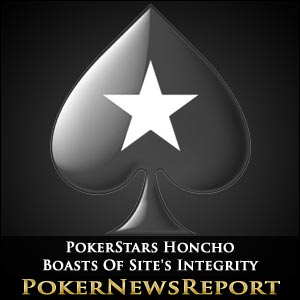 A PokerStars exec said the online poker site is highly credible and anticipates entering the U.S. market in a state-by-state or federal format in the future.

Eric Hollreiser, Head of Corporate Communications for the industry’s top online poker site, told Yogonet.com that PokerStars does fully expect to participate in a future regulated US market. He further added that the agreement that allowed PokerStars to acquire the assets of Full Tilt Poker via negotiations with the U.S. Department of Justice (DoJ) admitted no wrongdoing and that both online sites will submit applications to offer Internet poker services in the U.S. when regulations are in place.

There has been some question as to how PokerStars’ application will be viewed by gaming officials in whatever framework legality may eventually take shape. PokerStars did flout the Unlawful Internet Gambling Enforcement Act (UIGEA) of 2006 and continue to accept U.S. players despite the law that made it illegal for banks and financial institutions to knowingly allow players to deposit funds at offshore online poker rooms. PokerStars’ decision to provide online poker services in the U.S. post-UIGEA is a major reason why the site is now the leader in the industry at monolithic proportions, dwarfing player traffic at other sites and networks by a huge margin.

We are the leading online poker site and licensed in more countries than anyone in the industry, Hollreiser said. We bring tremendous value, credibility and integrity to the marketplace. With our U.S. legal issues now resolved, we are a very qualified candidate for a license.

Industry observers believe that the ability to enter the U.S. online poker marketplace in the future was tantamount to the negotiations and that PokerStars would not have agreed to the deal had this stipulation not been included. It is not known the extent that the DoJ argued against allowing this provision, if at all. However, some in the industry believe that the fact that the DoJ allowed its inclusion means that the DoJ is now condoning the legalization of online poker at the federal level.

The Justice Department could have very easily banned PokerStars and Full Tilt Poker from the United States forever, said Poker Players Alliance Executive Director John Pappas in a Forbes op-ed piece earlier this month. Yet it chose not to. It chose to clearly recognize that online poker can and should be a viable industry in this country.

Whether PokerStars and Full Tilt will be allowed in the U.S. remains to be seen. However, with its huge database of players, its hard to imagine that gaming officials from whatever state or federal authority that is reviewing their license applications would be able to turn them away. Past transgressions–such as ignoring the UIGEA–will undoubtedly be overlooked when the almighty dollar is involved.