PokerStars has signed a new director of social gaming with hopes of overtaking Zynga as the market leader in free-play online poker. 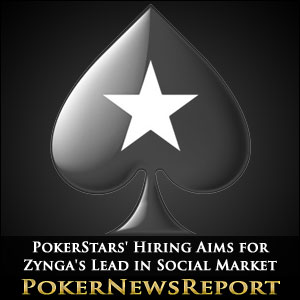 PokerStars has signed a new director of social gaming with hopes of overtaking Zynga as the market leader in free-play online poker.

Mark Buser, who previously led the monetisation and game design department at Idle Games, takes on a new role at PokerStars. Buser will be located at PokerStars’ Isle of Man headquarters and will be reporting to Alex Payne, Rational Group CMO, eGR reported.

PokerStars’ job posting in search of its new hire specifically mentioned that the role requires the ability to compete with Zynga Poker with the ultimate goal of becoming Facebook’s leading poker application. Zynga Poker currently dominates the social gaming online poker market by almost a 3 1/2 to 1 ratio over PokerStars.

Zynga recently announced that roughly 18% of its workforce would be let go in a cost-cutting move aimed at shifting more of its customer base to using mobile devices instead of computers. The slashing of 520 employees is expected to save somewhere between $70 million to $80 million annually.

The announcement caused trading on Zynga (ZNGA) stock to be halted twice yesterday. The stock’s value nosedived about 12% to close under $3 when the trading day ended. Zynga shares had been valued under $4 for roughly the last year after going public in December of 2011 at $10 per share.

Juxtaposition of Free-Play and Real-Money Market

While PokerStars aims for the free-play market, Zynga has branched out to the real-money poker realm in a partnership agreement with bwin.party in the United Kingdom. That partnership may also eventually enter the U.S. real-money online poker market as regulation slowly spreads throughout the states.

Converting social online poker players to real-money play is the ultimate goal of the companies in the free-play industry. That goal remains somewhat elusive as social players seem content playing for fun without wagering for real-money. With tens of millions of free-play online poker players active monthly at Zynga, converting just a small fraction of those players could be extremely lucrative.

PokerStars beta launched a play-money Facebook application in February. It began with its fast-fold product, Zoom Poker, but has grown to include a variety of game types. In the real-money online poker sector, PokerStars dominates the market with more than 50% of the worldwide share.