PokerStars is in danger of losing one of its best all-time customers after changing the currency exchange rates last week. 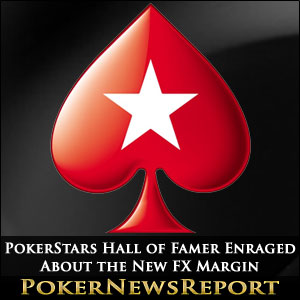 PokerStars is in danger of losing one of its best all-time customers after changing the currency exchange rates last week.

PokerStars’ recent changes to currency exchange rates almost provoked a riot in the online world. The mass negative reaction was predictable to some degree but what the company didn’t expect was one of its own Hall of Famers siding with the crusaders and screaming ‘foul’.

It all started on Thursday when Head of PokerStars PR Michael Josem announced on two plus two forums a change in the way the company will handle the currency exchange rates. Basically a margin was added for exchanging USD to GBR, EUR, and CAD. The margin is applicable only at the point of deposit and withdrawal.

According to PokerRealMoney.com, before the announcement, the players didn’t have to pay any rates whatsoever to convert their bankroll to their national currency; only the ‘non-standard’, volatile currencies had a respectable fee of 0.50% at conversion.

The Head of PR didn’t specify the exact margin saying:

We display the charges when a player makes a deposit. This is the internationally standard way of displaying such things.

However, the two plus two users did some digging and came up with the following percentage: 2.5%. That’s not exactly an extremely competitive rate or better than that offered by most banks, card issuers and payment providers.

The community reacted immediately and attacked Amaya’s decision calling it greedy and potentially deadly for its online business. Not long after the announcement, a PokerStars Hall of Famer joined in and sided with the rest of the community.

Virtually no one has played more hands on Stars than me. I’ve had eight years as a pro, multiple SNE years, and have visited the Stars HQ and met all the top dogs there. I’ve been a ‘Fan Boy’ for a long time, but no longer.

Brooks entered the PS Hall of Fame for collecting 5 million VPPs and playing more than 15 million hands on the site. You can read all about him here. And now, after eight years, he started having second doubts about playing and collecting any more VPPs.

‘MaleaB’ did some digging himself and is outraged by the potential money he can lose if he deposits and withdraws. He said:

He even compared PokerStars with the most competitive transfer services like transferwise.com where he would lose only 0.49 USD if he made the conversion of 1,000 GBP to USD. On PS, he would lose 40 USD compared to the mid-market value displayed on XE.com.

Josem responded to Brooks’ attacks agreeing that the poker room is no longer the world’s best place for players to exchange currency. Instead PS offers rates that are still competitive and below any other major competitor on the market. He explained:

PokerStars provides currency exchange services for players. These services cost money to operate, and it make sense to charge a fee for those services. Under the previous system…players were effectively encouraged to use our currency transaction services more often than they needed.

Furthermore, Head of Corporate Communication for the company, Eric Hollreiser released a statement on the PokerStars Blog saying that what the operator has done lately is good bankroll management. The operator is in fact entitled to make such actions since it helped the poker environment thrive and survive under the current harsh market conditions.

And since the market is not doing so well as of late, more similar tough calls and bold moves are expected to be made in the future. Tough calls like changing the current VIP program, changing the rake and maybe adding some more games that will cancel the edge of the grinder.

What is the next move for PokerStars? Let us know what you think in the comments section below.